The K-State women’s basketball team is set to travel to Morgantown, W.Va. on Saturday to take on No. 17 West Virginia in the back end of their two-game road trip. The Wildcats (9-12, 3-7 Big 12) are taking on a Mountaineer (19-3, 8-2 Big 12) squad that is seeking to win their third straight game after wins over Iowa State and TCU last week.

The Mountaineers are trying to push themselves into prime position to win the regular season conference championship before a meeting against Baylor in March that might decide who takes the regular season crown. With four players averaging over 10 points per game, the Mountaineers are hoping to stay perfect against the Wildcats in their third meeting since West Virginia joined the Big 12.

Head coach Deb Patterson’s squad is coming off of a hard, 84-65 loss to No. 23 Iowa State in Ames, Iowa on Saturday. Junior guard Ashia Woods led the way for the Wildcats with 25 points, with freshman guard Leticia Romero being the only other Wildcat in double digits with 11 points. A 1-10, 3-point shooting performance in the first half inhibited the Wildcats’ offensive performance, leading to a 26-point deficit going into halftime. Patterson’s attacking offense could only manage to whittle the Cyclones’ lead down to 12 in the second period.

This young Wildcats team is 1-4 in games against ranked opponents this season, and 1-6 on the road in non-tournament games. The Wildcats will need to break both trends in order to upset the Mountaineers in the hostile WVU Coliseum, where the Mountaineers have only lost twice this season.

After an up-and-down week, the Wildcats are going to have to rely on their young points leader Romero to become a factor against the more experienced Mountaineer team. Romero is only the third Wildcat in program history to earn three Big 12 Freshman of the Week awards. She was instrumental to the Wildcats in their win over Oklahoma last week and will be looking to replicate the near triple-double she had against the Sooners.

Romero, who leads the team with 27 3-pointers and a 39.7 3-point percentage, and her teammates will need to stay consistent from behind the arc. While the Wildcats are second in the conference with 6.5 3-point field goals per game, they are also ninth in the conference in 3-point shooting at 28.6 percent.

The Wildcats will need to limit turnovers and stay sharp from downtown to hold any chance of pulling the upset on Saturday. The Wildcats return to Manhattan to take on Texas on Wednesday. 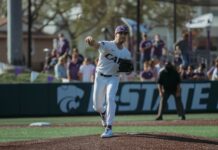 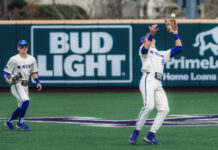 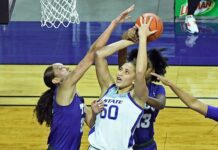