Police issued three alcohol related citations to Manhattan residents in the 700 block of N. Manhattan Avenue in the early morning hours of Tuesday. Peter Tatarko, 24, was issued a citation for allegedly possessing an open container in public. Kashif Khan, 21, was issued a citation for allegedly permitting an open container into public. Khan is an employee of Eighteen 63. Madison Ropp, 18, was issued citations for allegedly being a minor in possession of alcohol, unlawful use of a driver’s license and interference with law enforcement.

A Herington, Kan. man was arrested for allegedly striking another man unconscious in the early hours of Saturday morning. Curtis Heitfield, 21, was arrested for aggravated battery, battery and disorderly conduct in Aggieville near 12th and Moro streets. Heitfield was released on a $5,000 bond.

Riley County Police arrested a Manhattan man for allegedly possessing a number of illegal drugs. Levertis Horne, 22, was arrested while at the Riley County Jail for possession of opiates and of drug paraphernalia. Police searched his residence during an investigation into illegal drugs in the area of Manhattan. His bond was set at $5,000 and has since been released.

RCPD responded to a report of aggravated assault in Manhattan, Saturday night for an incident that took place 9 1/2 hours earlier. The report alleges that a 27-year-old male and 21-year-old female were confronted by a suspect known to both of them. The suspect allegedly possessed a firearm and held it in a threatening manner at the two. No injuries were reported in the incident and no arrests have been made. Police officials said they are still investigating the matter and are withholding further information due to the nature of the crime. 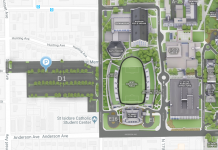