As of Thursday evening, a second set of candidates had declared their campaign for SGA president and vice president.

Construction and economy
According to Jankovich, the city of Manhattan has around $225 million worth of construction projects in progress or on the near horizon, including the Bluemont Hotel project and a new residence hall on campus.

He also presented a $6 million recertification of the city’s dykes, which won’t begin immediately, but will protect nearly $300 million worth of property from exposure to flood plain.

After what he described as a “pretty peaceful” holiday last year, Jankovich said the city doesn’t foresee any changes to the implementation of Fake Patty’s Day, which falls on March 8. As in years past, outside agencies will be brought in to beef-up law enforcement.

“Be careful, use good judgement and if you see someone that needs help getting home, do what you can to get them there,” Jankovich said. “Other than that, enjoy.”

Jankovich estimated that Manhattan’s new KFC location is about 30 days from completion, with a Taco John’s “a bit further back.” He also hinted to pay attention to the old K-Mart location on Poyntz Avenue. Although he said nothing is certain yet, he said his “intel” suggests that a business currently considering moving in “would make everyone really happy.”

Election season
The deadline to file for Student Government elections is Friday at 4 p.m. For more information on how to file, visit the SGA section of K-State’s website.

Another election platform has surfaced to challenge Reagan Kays and Cody Kennedy for student body president and vice president. Jarrett Romine, sophomore in biology, and Alan “AJ” Davis, sophomore in finance, declared their candidacy on Twitter this week.

The primary elections for president and vice president are on Feb. 25. 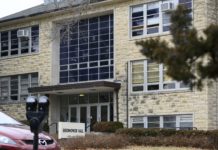