While plans are currently underway to renovate the K-State Student Union, the current facilities offer services and specials to current students, including inexpensive lunch, and extra safety.

Lunch in the Union for less than $3
What may be the cheapest meal on campus is available on the first floor.

“There’s a $1.20 hot dog from the Cat’s Den, the convenience store,” said Ross Jensby, Union Programming Council president and senior in mass communications. “And you can get an 88 cent bag of chips to go with it.”

Grads get it free
Rooms, including the Konza and Cottonwood Rooms, located on the second floor, are available for graduation receptions and parties.

“We offer free room rental to graduating seniors; a lot of people don’t know that,” said Audrey Taggart-Kagdis, assistant director of marketing and public relations for the Union.

Daily ice cream sale
Caribou Coffee, located on the first floor of the Union, has a “buy one, get one free” special on ice cream from 2-5 p.m. every day except Saturday. The ice cream is the same ice cream served at Call Hall.

The coffee shop goes through 30-40 total tubs of Purple Pride, espresso ecstasy, vanilla and chocolate each month, along with specialty flavors.

“MSO is here to support multicultural organizations on campus as well as our students,” Brandon Clark, program assistant in the Office of Diversity, said.

A total of 24 multicultural student organizations are registered with the Office of Student Activities and Services, also located in the Union.

Computer store has more than just laptops
The Union Computer Store, located on the first floor of the Union, carries computer-related supplies including headphones and flash drives. They purchase cables in bulk to help keep costs affordable. They also offer education discounts on supplies, including computers.

“We sell at below retail or recommended price because we know the students are poor in general when they’re in school,” Eve Grimm, assistant manager for the Computer Store, said. “We get them the things they need.”

Employees also stress it isn’t an Apple store; they do not repair devices.

It’s part of a regular patrol
Officer Tim Schrag of the K-State Police Department patrols the area that includes the Union, but he won’t tell you when he’s going to be there.

“It just depends, no day is typical,” Schrag said. “But I get here usually at least once while I’m doing a (Commerce) Bank run. If I’m on a bike, it’s a whole lot more.”

The most common crimes around the Union are bike theft and riding illegally on the sidewalks.

Art is homemade
The glass sculptures on the second floor were made by Mitsugi Ohno, a professor at K-State. He worked at the unversity as a Senior Mast Glassblower from 1961 to 1996.

The Union contains models of Anderson Hall, Cardwell Hall, U.S.S. Nimitz, U.S.S. Missouri and the White House. His other work can be found on the first floor of the Chemistry/Biochemistry Building, including replicas of the Nina, Pinta and Santa Maria.

There’s a special little girl …
There is a long-standing rumor that the upper floors of the Union is inhabited by a ghost- a little girl.

Kirk Johnson, a lead porter, has worked at the Union for 30 years and said the story has been passed around since he was a rookie.

“It was a really popular thing some years ago that a little girl ran around upstairs and moved things and whatnot,” Johnson said.

Her most common antics seem to be pushing furniture back before employees are finished vacuuming, Johnson said.

“We had people staying in here during the ice storm of 2008,” Taggart-Kagdis said. 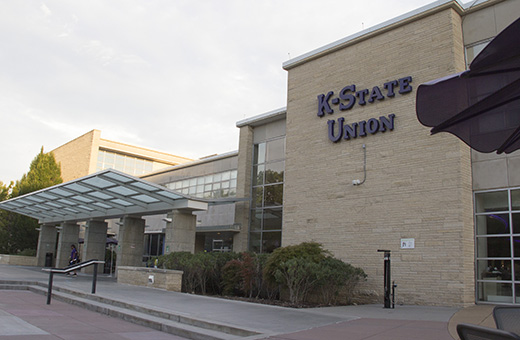 Changes to Union complete for the year