The K-State Wildcats have played many close games on the season so far. Unfortunately for the Wildcats, they’ve been on the losing end of those games more often then not. This Saturday, K-State will hit the road once again as they head down to Norman, Okla. to battle with the Oklahoma Sooners.

While the Wildcats (18-8, 8-5 Big 12) have not dropped a home game in Big 12 play this season, they have not found the same success on the road. Their only away conference win came against TCU in January.

While the Wildcats lost an overtime heartbreaker to Baylor the last time they were on the road, the Sooners (19-7, 8-5 Big 12) are coming off of something similar on their home court. Oklahoma fell to Texas Tech in their last game at Lloyd Noble Center. The Sooners have dropped two conference games on their home court this season.

In the first matchup between these teams in mid-January, K-State clawed past the Sooners in a 72-66 win, thanks to a 13-4 run to end the game. It was a physical battle throughout the game, with Oklahoma controlling the tempo for a majority of the contest. Senior guard Will Spradling said he expects a similarly fast-paced game in the rematch.

“They want to play real fast pace,” Spradling said after Wednesday’s TCU game. “We play up-tempo sometimes, but it’s not something that we want to get into with them. We do not want to make it a game of runs. We really have to lock down on defense and push the ball when we have opportunities but also take care of the ball and be smart.”

It was Spradling who led the Wildcats past the Sooners last season in Norman. With only a handful of Big 12 games left in his career, Spadling has been playing at a high level for the Wildcats of late. The senior from Overland Park has averaged 8.2 points per game this season, and his 3.3 rebounds per game are a career high.

One question for the Wildcats going into Saturday is the status of senior forward Shane Southwell. Southwell participated in pregame warm-ups on Wednesday but did not play against the Horned Frogs. The senior has now missed two straight games. After Wednesday night’s win, head coach Bruce Weber said Southwell could have played but he would not have been playing at full speed.

Tipoff against Oklahoma is set for 3 p.m. from Lloyd Noble Center. 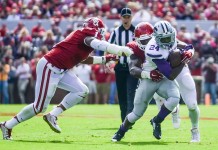 PREVIEW: Women’s basketball will look to Williams and Lee again versus...