On Thursday night, the K-State’s Student Senate worked through an agenda packed with 16 bills in final action. In total, the bills represented $18,668.32 in funding for various college student councils and campus organizations.

Sue Peterson, university director of governmental relations and assistant to the university president, kicked off the meeting with an update on the state legislature, which she said has been in session since Jan. 14. Kansas is in the second year of a two-year budget bill, but, according to Patterson, “it’s bad.” The legislature will seek to address funding problems with bills that target specific areas of the budget, including education. One project that could receive funding in the neighborhood of $1.5 million is a renovation to Seaton Hall.

“It’s kind of quieted down in the capital,” Peterson said, referring to the headlines generated lately by the controversial House Bill 2453 and a bill that would have legalized spanking. “They’re getting down to business on what they should be, which is fixing the budget and funding education.”

“It’s getting very, very interesting at this point,” Smriga said. “We’re getting some specifics as to what can be done with the renovation and what it might cost.”

Smriga also mentioned the possibility that the project could be divided into two phases, with the first addressing more pressing needs with funds currently accessible, and the second beginning when more funds become available. 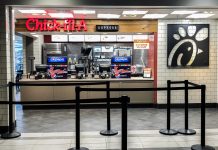