In K-State’s final home meet of the indoor season, the men and women tallied nine first place finishes among several personal bests. Junior Alyx Treasure had her best showing all season, recording 1.83m/6-00.00 in high jump to finish first. This matched her personal best, a mark that sits at seventh best in K-State history.

Among other athletes that tied or overcame personal bests: senior Merryl Mbeng and junior Joslyn Barnes in the 60-meter hurdles, sophomore Sonia Gaskin in the 800-meter run, senior Devin Dick in shot put and sophomore Reinis Kregers in pole vault. Several Wildcats did not set records, but recorded first-place finishes. Junior Dane Steen in the 200 meter, freshman Kain Ellis in the 1000 meter, freshman Audrey Schmitz in the 3000 meter, senior Jharyl Bowry in the men’s long jump and sophomore Alyssa Kelly in the women’s long jump.

Overall, K-State continued rolling strong at home and anticipate a strong contest next week at the Big 12 Championships in Ames, Iowa. Next week’s competition marks the third time the Wildcats have traveled north to Ames this season and the second time in two weeks. 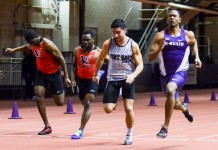 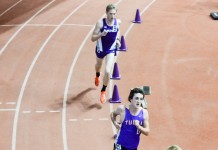