Philip Nel, distinguished professor of English, said he does not remember a time when he was unable to read. In fact, he said he read his first book, “Green Eggs and Ham” by Dr. Seuss, at the young age of 3.

Nel said he remembers reading it more than once in his first sitting and feeling satisfied with his accomplishment.

“Children’s books are the most important books in our lives, because we read them when we are becoming who we are and who we are going to be,” Nel said. “We remember them the longest, and yet, few people take them serious. Children’s books hit you when you are still figuring out your ideas about the world. They can expand the sense of what is possible.”

“I thought it would be a fun way to get people to be thoughtful about a familiar and intellectual series,” Nel said.

The class was mentioned on the Mental Floss YouTube channel, which has more than 790,000 subscribers, in an episode entitled, “26 Bizarre College Classes,” by contributor and New York Times best-selling author John Green. First posted on Nov. 6, 2013, the video has racked up nearly 1.5 million views.

“A lot of people grew up with Harry Potter,” Halle Sparks, freshman in biology, said. “Individuals can relate to it better than classic literary pieces.”

Green referred to the students who take Nel’s course as lucky, because they get to visit “Harry Potter’s Library” and not only read the books in the series, but also published works that influenced JK Rowling’s world-famous series.

“Children’s literature is a great way to bring people to English,” Nel said. “Children’s books tend to be complex and presented in an engaging and pleasurable (way). It seems fun and easy, but to create that experience and do it well takes planning.”

Nel, also a published author, defines his books as “books about children’s books.”

“JK Rowling’s Harry Potter Novels: A Reader’s Guide,” a guide composed by Nel in 2001, features a biography on Rowling, an analysis of the first four novels and discussion about what has made them so successful.

Nel said children’s and young adult literature is often more calculated than the unobservant eye may see. The Harry Potter series, for example, is full of historical references. Illustrated children’s books generally have extremely formulated plans for the drawings too.

One of Nel’s published books, “The Annotated Cat: Under the Hats of Seuss and His Cats,” details an in-depth look at Seuss’ original manuscripts, early sketches and illustrations.

The book is targeted to those who grew up with Seuss and shows the methods he used. It is aimed to help individuals understand the complexity of Seuss’ plots and expand imaginations.

“Books formed my creativity and imagination,” Sita Alejos, freshman in open option, said. “(They) helped me to think in different ways and helped me believe in something else beyond myself. By giving children a different view on things, it can form how they view others and change the way the world works.”

Nel’s work in children’s literature has not gone unnoticed. In addition to the five books he authored, he also had a role in the production of nine books on Amazon, has written articles for and assisted in editing numerous books. Nel has even made appearances on “CBS Sunday Morning” and NPR’s “Morning Edition” and “Talk of the Nation” for his work within children’s literature.

In 1992, Nel graduated from the University of Rochester with bachelor’s degrees in English and psychology. While in college, however, he said he had no idea where they were take him. So he worked two jobs along side taking classes that featured each path, and said that those decisions helped him decide he enjoyed English more.

“I would not encourage people to follow my plan,” Nel said. “I did not have a plan.”

After obtaining his master’s degree and doctorate in English at Vanderbilt University in 1993 and 1997, respectively, Nel said he still probably would not have guessed he would have ended up at K-State.

He and his wife, Karin Westman, head of the English department, moved to Manhattan when the university hired them both in 2000.

“I never thought, ‘One day, I will be a professor of children’s literature,’” Nel said. “But it has been a happy accident.”

While many students are not encouraged to major in English, Nel said there is a versatility that comes with starting with a degree in English.

“(Students) majoring in English can do anything,” Nel said. “The challenge is getting there.”

Fortunately, according to Nel, English majors are good critical thinkers, and so they figure out how to become lawyers, educators, advertising copywriters, art gallery owners, editors, doctors, poets and more.

“The bottom line is: you do not want to die with regrets, and it is ok to fail,” Nel said. “So, pursue your goals and modify them as needed.” 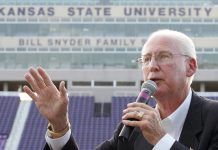 Critics of revised social media policy speak out on its effects