My name is Nathan Peterson. I was raised on my family’s farm, and hope to return after my time at K-State to be the fifth generation there. I also am one of “The Peterson Farm Bros,” from YouTube. You may have seen our videos (if not, you’ll have to check them out). We never expected them to get so many views, but we are now glad that we have the platform to share our experiences within the world of agriculture.

There are many misconceptions today about family farms. One recent example is Chipotle’s, a popular restaurant, recent advertisement videos. The video, “The Scarecrow” and their new comedy series, “Farmed and Dangerous” have both been designed to attack modern-day “industrial” farming, while showing that local, natural and organic family farms are the way to go.

I think Chipotle went too far on this marketing strategy, and consumers and Chipotle themselves need to know that.

I do think Chipotle is doing a lot of things right in their commercials. Consumers should desire to know more about their food, where it is comes from and have their questions answered. Chipotle also really emphasizes family farming and supporting your local farmers – which is a good thing. However, where Chipotle goes wrong is when they portray “big agriculture” as evil and small organic agriculture as “good.” I believe that both industries are “good,” and both have a valuable role in our food production system.

The way Chipotle describes “Farmed and Dangerous” on its website is, “Our original comedy series about the outrageously twisted and utterly unsustainable world of industrial agriculture.” While their show is fantasy, they are purposely attacking real-life agriculture. As you watch the show, you find that they have inaccurately twisted the types of technology used in farming today, and are attacking agriculture at its core – the farmer.

This is the livelihood that I grew up with. Agriculture is the most important industry in Kansas. It is the very thing Kansas State University was founded on. Even today, our peers here at K-State are future leaders and developers of technology that will be used all around the world to feed our quickly expanding population. Much care is put into making sure this technology is safe and sustainable. Providing so much food for so many people will require us, as farmers, to stay proactive in coming up with solutions, and making sure they are sustainable as we are doing now. Chipotle seems to be biting the hand that not only feeds it, but the whole world.

So, what would I suggest for Chipotle? I don’t think it should change much. Keep using local produce. Keep using as much organic produce as possible. Keep advertising that you use local, organic produce. They make really good burritos that, in turn, don’t take too much effort to sell.

But please, don’t say farmers are what is wrong with the food system. Don’t say technology in farming is dangerous. These things have been tested and regulated. There are definitely things wrong with people’s diets, lifestyles and health in general. There are probably things wrong with the way food is processed, but these problems caused by food content are not the farmers’ fault a vast majority of the time. The United States has the world’s safest and most abundant food supply in all of history. Chipotle can and will stick to what it has become good at doing, but it should stop tearing down the agriculture industry to build up its own, big corporation.

Until Chipotle stops doing that, I won’t be eating there, and I suggest you don’t either – because if they’re still making money off of us, nothing is going to change.

I would encourage every person to get educated about farming. If you are from the city, ask a farm kid you know what they do and why they do it. If you are a farm kid, you better know what you do and why you do it, so you can appropriately answer such questions. We, as farmers, must also always be examining ourselves to make sure we are doing what we do the right way.

While my family got lucky in having the chance to show our farm to millions of viewers on YouTube, I like to have conversations with my everyday friends about what I do as well. Most farm kids are like me in that sense too, so come talk to us. This is way more important than the mass of blogs you can find on the Internet these days. And if you think Chipotle is taking advantage of consumers with this marketing campaign, quit eating there. That’s what I plan to do. 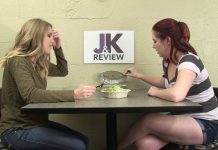