It seemed to be business as usual in Nichols Hall last Friday as teachers and students left for the day. While the classes of Daniel Davy, associate professor of theater, had been frequently cancelled, he continued to see his students and peers that day. Some said they recalled his good spirits.

Davy was planning to retire after this semester, after having taught at K-State for 20 years. However, his plans were cut short. It was announced Monday that Davy had died on Saturday during an emergency heart surgery.

“He had a bad heart,” Maullar said. “He’d had an operation before now, but there was no indication of anything wrong. We just saw him last week.”

When the news on Davy’s death hit the K-state campus, shock and disbelief rolled through the students and staff of the theater department.

“When I got out of my morning class, I had about 12 texts asking about it, and I couldn’t grasp that it was actually happening,” Eugenia Frey, senior in theater, said. “I was just in his class the day before he passed away.”

Davy had been a staple in the lives of many students since he began teaching at the university in 1994. Davy was a professor of introductory theater, theater history, dramatic structure and taught classes on greek, roman, baroque and modern theater.

Students said that going back to class after his passing felt somewhat hollow.

“Class didn’t feel like class at all,” Frey said. “It was very surreal. The first few minutes of our class, we all shared what we liked most about him and his teaching method.”

Other classes didn’t know what to say at all.

“We went back to class today (Wednesday) and it was very eerily quiet for the first 20 minutes of class,” Tyler McComb, sophomore in theater, said. “Everyone knew what had happened, obviously.”

An entertaining and engaging teaching style and that unique sense of humor were instantly missing from the atmosphere, both Frey and McComb said.

“I really liked his interactive teaching style,” McComb said. “He would talk to us, with us, instead of just telling us what was happening in a play.”

Davy’s legacy of teaching and interacting with his students is well-recorded. Over the years, Facebook groups, Twitter accounts, and fan clubs have been created in dedication to his “Davy-isms.” Davy’s way of keeping his class on track, or perhaps getting a bit off-track himself, left students with unforgettable moments they said they needed to share.

Social media accounts provide examples of Davy’s eccentric comments in class, including but certainly not limited to, “I just hit you in the face with art and you can’t even see,” and, “When I call on you don’t sink into your chair and grin like the cheshire cat that vanished.” Some classes of students have had T-shirts made featuring their favorite Davy-isms.

Maullar has been collecting quotes and regards from current students and alumni in preparation for his memorial service today at 5 p.m. in All-Faiths Chapel.

“They just keep pouring in. I have a whole file of them,” Maullar said. “I’ve never seen such an outpouring from students. He meant so much. What’s repeated in all of these, over and over again, is that Dan taught them how to think, in a way that no one had ever taught before.”

The service is open for any to attend. Maullar said that Davy would likely not want a big scene made over his passing, but that wouldn’t stop them.

“He was a very humble man,” Maullar said with a hearty laugh. “He wouldn’t want a fuss this big, but that’s too bad.”

Frey said that Davy’s enthusiasm and encouragement was hardly believable.

“I will miss his humor the most,” Frey said. “Every time I walked into his classroom, it was so unpredictable in the most enjoyable way. The passion he had for theater was unreal. He was always upbeat and ready to teach.”

Davy’s classes have been taken over by Alison Wheatley, assistant dean and associate professor of the College of Arts and Sciences. Wheatley will continue to teach Davy’s courses until a replacement is found, or until the end of the semester.

Davy, of course, wasn’t without his personal quirks.

“He was a brilliant man, but he was terrible at computer stuff,” Maullar said. “He would call me and say things like, ‘How do you fill out this computer form?’ ‘Why do we have to do this anyway?’ He never asked to update any of his technology. It was funny.”

Funny described a majority of experiences students had in Davy’s classes. Whether it was his intersession comedy course or a subject as initially daunting as greek and roman theater history, Davy’s students credit him with being able to provide them information beneficially.

“He was really funny,” McComb said. “He taught his class in a really funny way, a different funny. People would pay attention. He wanted to have fun with us, while giving us the information we needed to pass. I’m gonna miss most the random thoughts he would have in the middle of telling us something.”

Davy knew just how to reach his fellow faculty members as well.

“One of my favorite things was when we used to take turns doing the minutes for the faculty meetings, and I couldn’t wait until it was his turn,” Maullar said. “Because these notes would come back to us hilariously written, with only words that he could put together. They were just so funny, his little quips. It lighted the whole meeting up.”

Maullar has kept in close touch with Davy’s family as she organized today’s service. Students dealing with Davy’s death were encouraged to seek counseling services if needed, but Maullar said she hoped that being together with the K-State theater family would offer some sort of aid. Her lasting image of the professor is one that is shared by many others.

“For the last 10 years he always wore his fishing cap with sunglasses over it, his bright tennis shoes, his zip-up sweatshirt, carrying his lawn chair,” Maullar said. “This picture of him is so etched in my mind. He was an incredible teacher in every sense of the word.” 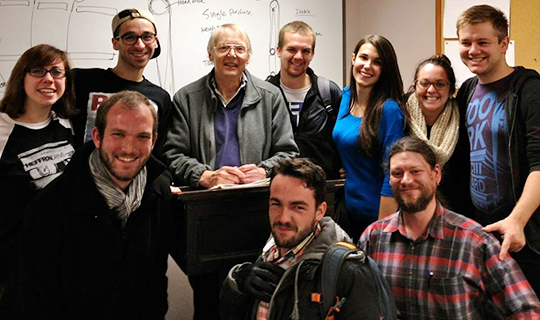