After a season of ups and downs, the K-State women’s basketball team (11-17, 5-12 Big 12) are preparing to take their home court for the last time this season against TCU (16-13, 7-10 Big 12) on Monday. It will be the final appearance at Bramlage Coliseum for three Wildcats: forwards Katya Leick and Ashlynn Knoll, and guard Chantay Caron.

One of the stories to watch coming into the game against TCU is Knoll’s resurgence in the lineup for the Wildcats. Knoll, who missed much of last season with an injury, is playing the best basketball of her K-State career. While averaging only 20 minutes of playing time in the last three games, Knoll has been able to capture three double-digit performances.

“It’s great to see the momentum that Ashlynn will have behind her going into this game,” K-State head coach Deb Patterson said.

Another player who is coming on strong for the Wildcats is freshman guard Kindred Wesemann. Wesemann has been a pivotal piece alongside Leticia Romero during the last three games, shooting 47.6 percent from behind the arc and scoring approximately 38 points during the stretch. Wesemann has taken some of the pressure off Romero, giving the Wildcats better spacing on the court and allowing more open shots.

Over the last few games, Romero, Knoll and Wesemann have given the Wildcats a spark they could have used at the beginning of conference play. Since the last matchup with TCU, a 64-44 loss in Fort Worth, Texas on Feb. 19, the trio has carried the team on the offensive end of the court.

The Horned Frogs have a solid defense, and are known for forcing turnovers throughout games. Horned Frogs head coach Jeff Mittie’s team is ranked first in the Big 12 in steals, averaging more than 10 steals per game, and second in the conference with a positive 3.94 turnover margin.

While every player on the Wildcats will want to win this last home game of the season, seniors said they know that this game will mean the most to them.

“Everybody wants to win on their senior night, and on Monday night it’s (our) last game in Bramlage. It’s a real big deal and nobody wants to leave on a loss,” Knoll said. “We kind of have a dirty feeling in our throat from losing to TCU. I think we’re all pretty fired up about it and just ready to prove that we should have beat them the first time and that we definitely can (beat them). So (we’re ready) to fight hard the last time on that court and take it to them.”

While the Wildcats will continue to improve after this season, Patterson said she understands that she will be losing three talented players.

“We’ve got a really great senior core, although none of them have played major chunks of minutes for us, they all have been great-end people in the classroom,” Patterson said. “They’ve been great in respect of working to lead and teach this young team on and off of the floor what the standards are.”

On Saturday, the Wildcats traveled to Stillwater, Okla. to take on No. 15 Oklahoma State, who beat the Wildcats in a close contest. The Wildcats found themselves in a hole early, going into halftime with a 36-23 deficit. But with solid play from their young backcourt, the Wildcats stormed forward with two separate runs in the second half to almost pull off the upset in Gallagher-Iba Arena. However, the runs just weren’t enough to stop the Cowgirls from storming back on their home court to win the game, 67-62.

Tipoff for the Wildcat’s last home game of the season will be at 7 p.m. tonight in Bramlage Coliseum. 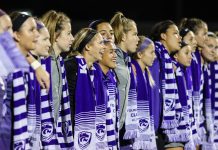 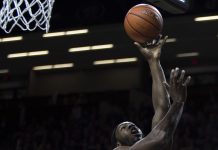 One last game in Bramlage for Wildcat seniors 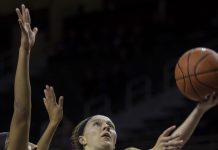