The K-State baseball team got off to a slow start this season, losing seven of their first eight games. Since that point, however, the Wildcats have been red hot. A weekend series sweep of the Iowa Hawkeyes showed why the defending Big 12 champions are still the conference favorites.

“We could have really easily laid down today and put our two wins in our back pocket and take winning the series as okay but our guys didn’t do that,” head coach Brad Hill said. “I was really proud of them for not doing that.”

After wins Friday and Saturday, the Wildcats appeared sluggish coming out of the gate in the series finale. Iowa jumped out to a 7-2 lead before K-State got their bats going. The Wildcats began to show life in the bottom of the sixth, answering with four runs of their own. Junior outfielder Mitch Meyer blasted a double into right field to get the scoring started in the seventh inning, where the Wildcats would add another three runs.

In the bottom of the eighth, K-State added three more runs to give them a comfortable 12-8 win and a series sweep.

“After the sixth inning, we had some huge at bats like (Tanner) DeVinny, Mitch Meyer, RJ (Santigate), he had a great day,” junior infielder Shane Conlon said. “Just a huge day from those guys today.”

On Friday, the Wildcats put up three runs in the first inning before stalling out for the remainder of the game. It turned out to be enough, though, and K-State picked up a 3-2 win.

On Saturday, the Wildcats had another strong pitching performance, beating the Hawkeyes 5-2. Both Friday and Saturday, Hill called upon last season’s Big 12 Freshman of the Year Jake Matthys to come in and shut it down to finish the game. Matthys was able to do just that, claiming two saves in two days.

“I was the guy who came in for all the saves last year, they expected the same out of me this year,” Matthys said. “I struggled the first outing but now that I got that first save I think things will start rolling better.”

The Wildcats will continue their homestand over the next six games. K-State will be back in action on Wednesday to take on Nebraska-Omaha at Tointon Family Stadium. 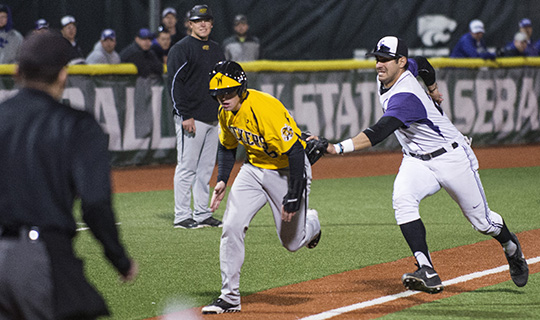