The state of Kansas has recently introduced a bill that would eliminate “no-fault” divorces. This bill would remove incompatibility as a valid reason for getting a divorce, making it a longer, more difficult process. But is this really a good idea?

Currently, Kansas is a “no-fault” divorce state, and Republican Rep. Keith Esau, a member of the House Judiciary Committee, said he wants to change that. If a divorce is filed because the couple is simply incompatible, there currently does not need to be proof that any one person is at fault. One side of the party can file a “no-fault” divorce, even if the person’s spouse does not agree on ending the marriage. This type of divorce only takes one spouse to carry it through.

Esau said he wishes to eliminate “no fault,” saying it, “gives people an easy out instead of working on the marriage.” The purpose of this new bill will be to make it harder for a divorce to be finalized by making the process take longer and requiring more evidence that the marriage will not work out. It is designed to require specific, legitimate reasons for a divorce – instead of incompatibility. The bill is supposed to encourage strong families, and dissuade many couples from ending their marriage.

But will this bill do more harm than good?

Controversy and negative reactions have surrounded this bill. Other legislators, including Judiciary Committee member Democratic Rep. Jim Ward, have expressed that they do not think that this bill should be passed.

“We really should let people decide when to end relationships,” Ward said in a Feb. 7 Wichita Eagle article. “He feels pointing fingers and forcing a couple to prove who is at fault will just cause more conflict.

Would this bill actually prevent couples from filing for a divorce, or will it just make the process more grueling: ending with the same results, while costing much more time and money.

In my opinion, passing this bill would be detrimental for the state of Kansas and lead to many other serious problems outside of just the couple’s incompatibility.

Making a divorce a more complicated process does not only affect the couple involved, but also everyone around them. The bill is supposed to “make families stronger,” but I think that it will do just the opposite. A divorce creates so much stress and harm on families already, so why make it even harder? Laying blame doesn’t solve problems; it only exacerbates them.

Continuing “no-fault” divorce will help maintain the family’s relationship and create a healthier environment, especially if there are children involved. The motive of the bill is to make more time for the couple to work things out before making this big decision. Creating more barriers for a couple going through a divorce will most likely result in more resentment and frustration, instead of a happy ending.

Many divorces are long, complicated, and messy, and passing this bill will only make them worse. Assets need to be divided and custody of children needs to be resolved. Families shouldn’t have to lay blame and take sides. They should be as painless as possible, hoping to eliminate the tension and strain.

Making it more difficult to get a divorce will also create more expenses for those involved. More lawyers will have to be hired and more court appearances will have to be made for the divorce to be finalized. This will cause more financial burdens between the couples, not resolution.

According to the “Daily Infographic,” nearly 50 percent of marriages in the U.S. end in divorce. This number shows how many couples are unhappy with their marriages. If a divorce is a very stressful thing, why create unnecessary hardship on nearly half of the county’s married population?

Sadly, I do believe that the divorce rate in our country is too high. However, I do not believe it is something that can be fixed with this new proposed bill to eliminate “no-fault” divorces.

Vanessa Vlasic is a sophomore in mass communications. Please send comments to opinion@kstatecollegian.com. 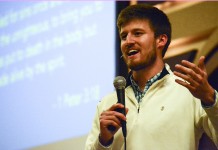