The K-State Wildcats used solid pitching on Friday and Saturday, followed by a late-innings offensive storm on Sunday to take three games from Iowa and even their record at .500 for the season. After a 1-7 start, the team is surging back and is looking to continue their streak of hot play as they welcome the Nebraska-Omaha Mavericks (5-7) tonight at Tointon Family Stadium.

“It’s kind of like starting all over a little bit but you really can’t hide the fact of the way you started,” head coach Brad Hill said following the game on Sunday. “So all you can do is just try to move forward and keep trying to play good baseball, build on some things that took place this weekend.”

The Wildcats (7-7) scored 10 runs in the final three innings on Sunday to steal a win, showing off the high powered offense that fans became used to last season. After stumbling in the first couple weeks of the season, the bats are starting to heat up again for K-State, led by the teams’ upperclassmen.

“It feels good to start swinging the bats again like we should,” junior infielder Shane Conlon said.

Junior shortstop Austin Fisher is pacing the team in both batting average, with a .392 mark, and slugging percentage this season, at .471. Senior first baseman Shane Conlon is hitting .308 this season, and already has a team-high five doubles, while fellow senior center fielder Ross Kivett leads the team in both walks and hit-by-pitches, giving him an impressive .452 on-base percentage from the leadoff spot.

For Omaha, right fielder Cole Gruber is the leader on offense with a team-highs in batting average (.408), on-base percentage (.463) and slugging percentage (.510). Center fielder Alex Schultz is also having a good start to the season, batting .364 in a solid outfield for the Mavericks.

It is worth noting that the two teams have played a couple of the same teams this season. Last weekend, Omaha went 1-3 against Grand Canyon, the team that K-State started its winning streak against with a couple of big wins two weekends ago. The Mavericks also lost a game to Iowa, who the Wildcats just swept. In total, Omaha has a 1-4 record against teams that K-State has a 4-0 record against.

K-State is expected to start Nate Griep tonight against the Mavericks. The freshman right-hander has pitched very well out of the bullpen so far this season, to the tune of a 1.59 ERA in four appearances. 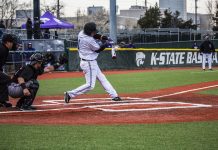 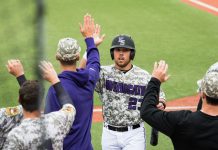 Bat Cats to take on Nebraska-Omaha

K-State takes rubber match, series with Sunday win over No. 3...