Kansas is often most well-known for the role that it plays in America’s Breadbasket. By providing food for neighboring states and serving as a key food source for much of the country for more than 40 years, Kansas wheat growers have kept a tradition of community goodwill and friendship that encourages people to bake bread for their neighbors and friends.

March is “Bake and Take Month,” a philanthropic project and contest supported by the Kansas Wheat Commission, an supplementary organization of the Kansas Association of Wheat Growers, and the Home Baking Association. During the month of March, Kansans are encouraged to bake bread and other goods at home and share with members of the community.

“The best thing about it is not only baking, but actually going over to a neighbor’s house and spending time with them and visiting,” Marsha Boswell, director of communications for Kansas Wheat, said. “It just gives you an excuse to visit someone who haven’t seen in a while and enjoy their company.”

Those who participate are encouraged to share their experience with Kansas Wheat on its website or Facebook; every participant who does so is entered in a random drawing to win a book basket. Last year’s winner was Debra Stewart’s second grade class at Logan Elementary School in Topeka, which entered the contest for the first time.

“It’s a good way to be involved, have a sense of community,” Stewart said.

“It makes it more relevant to learning,” Stewart said. “It’s not just about learning fractions. It makes (the students) realize you don’t just go to Walmart to buy bread, you can make it from scratch.”

As the students worked with the food service workers, they came to know them by name instead of just as “the lunch ladies.”

“The kids got to know people who help us and put meals on the table,” Stewart said.

The rolls of bread were divided into plates and given to senior members of the community. A year later, Stewart said the children who participated in the project still talk about it.

“They don’t give it a second thought that they’re doing something special. They just enjoy the process,” Stewart said.

Boswell said that 4-H Club and church organizations often participate in “Bake and Take Month.” However, anyone is free to join in, whether they enter the contest or not.

“A piece of hot bread and some butter,” Stewart said. “There’s nothing better.” 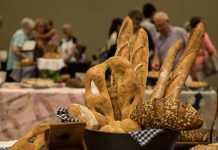