The Iowa State Cyclones have a chance to do big things in the NCAA Tournament. With a roster filled with talent and experience, coupled with smart coaching, it’s no surprise that Iowa State has played as well as they have this year; don’t be shocked if their play continues to dazzle during March Madness.

One reason for the Cyclones’ potential success is their senior leader, Melvin Ejim. Named the Big 12 Player of the Year, and Iowa State’s leading scorer, Ejim has averaged 18.2 points per game and pulled down 8.6 rebounds per game. Ejim has played significant minutes in four NCAA tournament games already, and won two of them. Pre-game jitters should not be an issue for someone with that much experience and when a team’s best player is ready to go from the opening tip, it could be the end of the road for their opponent.

Ejim is not the only upperclassman for the Cyclones that contributes on the scoreboard, however. Senior guard DeAndre Kane is a great player as well. Kane is playing his only year at Iowa State, but he is making the most of it. He is a First-Team All-Big 12 shooting guard who has averaged 17.1 points, 6.7 rebounds, and 5.9 assists per game.

The duo of Kane and Ejim is almost impossible to stop. As if they aren’t enough, sophomore forward Georges Niang can also score for the Cyclones averaging 16.2 points per game. In Iowa State’s final eight games, Niang scored less than 10 points just twice, with both games ending in defeat for the Cyclones. Getting Niang going is vital for his team’s success.

Iowa State’s big three may be great scorers, but it’s the little things for the Cyclones that help them excel. Coach Fred Hoiberg draws up plays in key situations that get his team quick baskets. In tight NCAA tournament games, those few points scored in quick succession just before halftime or coming out of timeouts can be the difference between winning and losing.

Despite not having a player taller than 6 foot 9 inches, the Cyclones have controlled the boards. They are 19th in the country, and second in the Big 12, in rebounds per game and lead the country in defensive rebounds per game. Controlling the defensive glass takes away second chance points from the teams you face.

Last year’s national champion, the Louisville Cardinals, shared some characteristics with this season’s Iowa State team. The Cardinals ranked highly in rebounding and scoring, just like the Cyclones do. In fact, Iowa State ranks higher in both categories than the Cardinals did last year.

Where the comparison between Louisville and Iowa State splits apart is defense. The Cyclones are just not good defensively. They give up 73.9 points per game, ranking them 279th in the country. They must find a way to shore up that aspect of their game to move far into the tournament.

Iowa State has a lot of great things going for them. They have faltered at times this season, but if they play their best basketball in each of their NCAA Tournament games, they could make a deep run. Keeping teams off the glass, scoring at a high clip, and Hoiberg’s coaching prowess could propel the Cyclones into a team that is playing into the month of April. 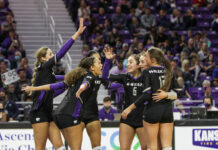 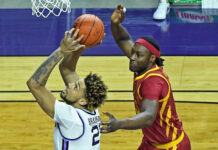 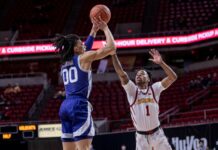