The K-State women’s rowing team began their spring season with a strong performance down in Austin, Texas where they finished with multiple first place finishes. The Wildcats landed two first place finishes against the No. 19 Oklahoma Sooners on Lady Bird Lake, their first ever win over a ranked opponent.

Along with their strong performances against the Sooners, K-State blew by Tulsa with three wins in four races.

Next up for the Wildcats will be the Sunflower Showdown in Kansas City, Kan. on Friday, where K-State will take on in-state rival Kansas.

Know Your Opponent: Oklahoma does it all on offense 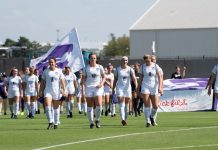 K-State falls to Oklahoma 3-2 in overtime