The reality of Friday’s 56-49 defeat against Kentucky in the second round of the NCAA Tournament was painfully present in the K-State locker room. Tears had to be held back by several players as the media entered the room with questions. A trio of Wildcats moved to the far corner of the room to console one another. However, as disappointing of a result as the final game was, it could not overshadow what was an outstanding season.

Even minutes after the tough loss, the Wildcats appeared to agreed. The group that took the court in St. Louis was a far cry from the one that fell to Georgetown by 27 points in the Puerto Rico Tipoff — one game in a tournament freshman Marcus Foster called a turning point in the Wildcats’ season.

“Puerto Rico sticks out most in my mind,” Foster said in the locker room after Friday’s game. “I
feel that’s when we came together as a team. It sucks that we had to learn from
losing at those times, but that’s when we became a better team. We were losing,
watching our film, and seeing how bad we were playing, and it was just little
mistakes that needed fixing. That’s why we finished our season so good.”

The Georgetown game was the last time this K-State team would call itself bad. The Wildcats went on to win 10-straight games to boost their record from 2-3 to 12-3, including a marquee victory at home against the, then, sixth-ranked Oklahoma State Cowboys on Jan. 4.

What sparked the complete 180? K-State head coach Bruce Weber told the media it was attributed to belief, rather than X’s and O’s.

“I think we told the guys that we believed in them, that we had to be a great team,” Weber said. “They bought into it, and every day we got together and talked about being together. (Again) they bought into it. I gave them a goal in the middle of the season to go undefeated in December. They took it and went with it and even went a little further.”

The Wildcats had every reason to be motivated to get better. Early attendances at Bramlage Coliseum were laughable at best, as many fans began to think even calling the season a “rebuilding year” was a stretch.

“A lot of people were doubting us in the
beginning of the season, but we fought through adversity and changed the whole
outlook of the season,” freshman guard Wesley Iwundu said. “Things went uphill, we went on a winning streak in
December, and from there we took off through conference play.”

K-State’s performance in the Big 12 was commendable in its own right. In a year where eight members of the conference made it to some sort of postseason action, the Wildcats’ 10-8 mark, including 8-1 at home, highlighted the positives that came from December’s streak. Of course, dropping nine out of 11 road games was unsettling, but Weber’s squad was in the game to the end in nearly every defeat.

Simply put, K-State continued competing and improving. Both are expectations stemming from the program’s recent success, and both are factors that the team looks to continue next year.

“I felt like the foundation started being laid a
couple years ago, and it’s really just kept building and it’s kept getting
better,” senior guard Will Spradling said. “Next year they got a great core group of guys coming back, and the
coaches did a great job at recruiting. They got really good guys coming in that
fit the system, and that’s something that they did a great job at last year,
bringing in these freshman that fit the system and could really help us out.” 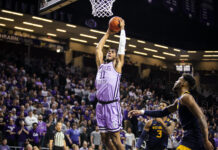