The Iowa State Cyclones are one of the two Big 12 teams that remain in the NCAA Tournament, the other being Baylor. The Cyclones are a solid team that are undefeated outside of conference play. They have the talent, coaching and projected matchups to play deep into the tournament.

Unlike the Bears, the Cyclones’ victories have been against two lower seeds. They were expected to make it to the Sweet 16, given that they earned a three seed. As far as opposing seeds go, Iowa State caught a break going as they head into the next round. Although they will face the No. 7 seed Connecticut Huskies instead of No. 2 seed Villanova, Iowa State will still encounter a tough challenge with UConn.

The Huskies (28-8, 12-6 Big 12) got hot in the American Athletic Conference tournament, but lost in the title game to Louisville. They are a team that prides themselves on defense, which are teams that Iowa State loves to shred. In their opening game of the tournament, the Cyclones scored 93 points on a team that allows the 10th fewest points in the country. While UConn is a good team, they do not matchup well against Iowa State.

Losing sophomore forward Georges Niang, who is out with a broken foot, hurts the Cyclones. They score well enough that they can win in the tournament. Niang scores 16.7 points per game, but Iowa State’s ability to spread the ball around the floor leaves a lot of players open.

Freshman guard Monte Morris and junior forward Dustin Hogue have stepped up for Iowa State in Niang’s absence, scoring above their season averages against North Carolina. It does not have to be those two players that score every game for the Cyclones, however. There just needs to be someone that scares the defense enough that it takes focus off of seniors Melvin Ejim and DeAndre Kane.

If the Cyclones get past UConn, they will play either No. 1 seed Virginia or No. 4 seed Michigan State in the Elite Eight. These are two very good teams. Iowa State might come out on the losing end against Michigan State. The Cyclones would have a better chance of beating the defensive minded Virginia team.

If Iowa State head coach Fred Hoiberg and his squad see their time run out in the Elite Eight, it will still be further than Baylor went. The Bears have a tough matchup against the No. 2 seed Wisconsin Badgers.

The Badgers are in the top 50 in fewest points allowed per game, and have recently put it all together on offense. Both teams have been playing well as of late, but Wisconsin has been the better team all season. If Baylor can pull off an upset, they could play No. 1 seed Arizona who has arguably been the best team in the tournament.

Baylor can win beat Wisconsin. But, it will be much easier and much more likely for Iowa State to beat UConn. The Cyclones have a better chance than the Bears of getting deep into the tournament simply because of their next game. Hoiberg’s squad has continued to fight back all season, they will have no fear if the Huskies jump out to the lead in their Sweet 16 matchup.

Austin Earl is a freshman in pre-journalism. Please send comments to sports@kstatecollegian.com. 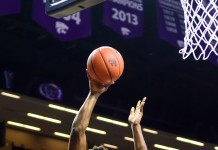 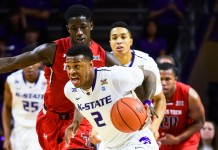