After a tough weekend series in Norman, Okla. and a game cancellation Tuesday due to weather, the K-State Wildcats will hit the field again tonight to take on the Nebraska Cornhuskers.

The Cornhuskers (13-9, 1-2 Big Ten) will be playing their second game in the state of Kansas in as many days. Nebraska stopped in Wichita Tuesday night to take on Wichita State, where they defeated the Shockers 7-3.

The two teams have had two common opponents on their schedules so far this season. Both the Wildcats and Cornhuskers have played the Iowa Hawkeyes and the Bears from Northern Colorado. K-State went 6-0 against the two teams while Nebraska struggled a bit more than the Wildcats, going 2-3.

After a 1-7 start to their season, the Wildcats began to figure it out as they strung together nine straight victories. That winning streak was snapped this past weekend when the defending Big 12 champions took the field against the team that they beat out to win last year’s conference title, the Oklahoma Sooners. K-State was simply not ready for the offense that Oklahoma brought to the table, as they outscored the Wildcats 22-6 through the first two games. The Wildcats would salvage the weekend series by claiming their lone win of the series on Sunday, 5-0.

Luckily for the Wildcats, they have been pretty good in front of their home crowd. Head coach Brad Hill’s bunch is 9-0 when playing at Tointon Family Stadium this season. K-State will look to repeat the success that they had last season against the Cornhuskers. During their 2013 campaign, the Wildcats defeated Nebraska in all three games that they played each other, outscoring the Big Red 32-19.

Heading into tonight’s game, last year’s Big 12 player has shown why he is such a crucial piece to this K-State squad. Senior center fielder Ross Kivett has a streak of 21 consecutive games of getting on base. Kivett also boasts a nine-game hitting streak heading into the matchup with the Cornhuskers. The senior’s 21-game on base streak is a personal best for him as he now sits at a .467 on base percentage. He now ranks fourth in the Big 12 in OBP.

On the bump for K-State will be redshirt freshman pitcher Colton Kalmus. The freshman is 1-1 this season with an 6.30 ERA.

First pitch is scheduled for 6:30 p.m. from Tointon Family Stadium. 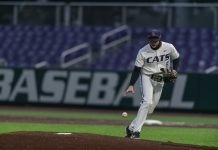