The K-State Wildcats were excited when the 2013 Big 12 player of the year Ross Kivett announced that he was going to pass up an opportunity to begin playing professional baseball to come back for his senior year. His reason for staying became clear Wednesday night when he became the first Wildcat since 1997 to hit for the cycle as the Wildcats routed the Nebraska Cornhuskers 12-6.

“I honestly didn’t start thinking it until after the double,” Kivett said. “When I hit the double I was like, ‘I think I got a really good chance of hitting a cycle today.’ First time in 22 years I got to say that I did that.”

The Wildcats had the bats going early and often on a rainy, windy day at Tointon Family Stadium. After scoring two runs in the first inning to start off the game, which included a home run by Kivett, K-State scored six runs in the bottom of the second inning and it was all K-State from that point on.

“Yeah (Kivett) is pretty good, he’s a pretty special player,” head coach Brad Hill said. “It was a special night for him obviously. He got us off to a great start offensively. We had a great offensive approach tonight, we really did. I was really proud of what we did tonight.”

The Wildcats dominated the Cornhuskers in many facets of the game, one of them that was pretty obvious was pitching. Redshirt freshman Colton Kalmus pitched a solid five innings for the Wildcats on the day. Kalmus only allowed one earned run on the day and struck out three batters. He is now 2-1 on the season.

“Great start,” Hill said of Kalmus. “(He is) a pitcher, a young guy. I mean he’s got about three starts. A redshirt freshman to go out there with the wind howling 35-40 (MPH). Like I said, I thought he just did a really good job for us and commanded what he was doing. Composure, toughness all of those things came into play tonight with him.”

Kivett finished the game 4-5 from the plate with three RBIs to go with his cycle. Another Wildcat that stepped up in a big way was senior catcher Blair DeBord who went 3-5 from the plate and drove in two runs. DeBord was only batting .098 coming into the game.

It was certainly a special night for Kivett, who made the tough decision entering the season to return to school for an opportunity at another special season in purple. Early on in the day, when Kivett tweeted out that it was a good day to hit, he wasn’t joking. By the bottom of the third inning, Kivett had his home run, triple and double. He said he knew the whole time what he needed to complete the cycle. Although Kivett said he knew he had the opportunity for the cycle, he would not have turned down the opportunity for extra bases.

“No shot, you got to take the bases,” Kivett said when asked if he would have stopped at first base just for the cycle. “This game is a cruel karma game and the game will play you back if you don’t do it. I would have taken as many bags as they would have let me.”

The win on Wednesday pushed the Wildcats record to 15-9 on the season, they are 14-2 in their last 16 games. K-State will now hit the road for four games starting on Friday where they will travel north to take on the Creighton Bluejays. After that they will take on Nebraska-Omaha before returning back to Tointon Family Stadium to take on their in-state rival Kansas next Friday.

BatCats hope to hop out of last place 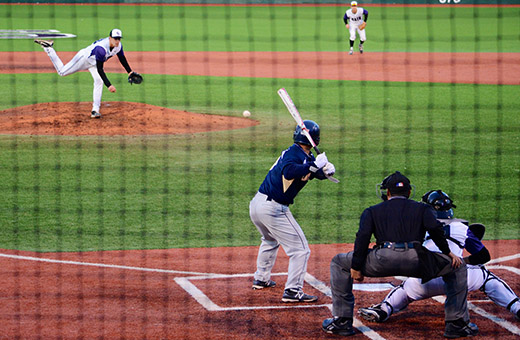