For the past 18 seasons, former head coach Deb Patterson commanded the sidelines for the K-State women’s basketball squad. However, Patterson was let go a little over two weeks ago when the athletic department decided to go in a different direction moving forward.

On Tuesday afternoon at the new West Stadium Center of Bill Snyder Family Stadium, Athletic Director John Currie introduced Jeff Mittie as the man who will be leading the Wildcats into a new era of women’s basketball.

The idea of a new era of K-State women’s hoops has some K-State fans excited.

Around 100 fans made the trip up to the club level of the center to watch Mittie’s introduction. K-State Athletics decided to make the press conference open to the public, so purple clad fans lined the room as they listened to Currie and Mittie speak. At the end of the press conference, fans were able to meet Mittie.

“Excitement for a new coach,” Steve Hall, Manhattan resident and K-State fan, said about why he came out to meet the new coach. “Looking forward to next season and how things come together with the new administration of the team.”

Though Mittie will be the new head coach, there will still be some familiar faces on the sideline. Assistant coaches Claire Coggins and Tasha Dickey are the first two members of Mittie’s new staff. Mittie said that he reached out to former assistant coach Shalee Lehning about being on his staff, but she declined.

“That was one of my first phone calls; I recruited Shalee,” Mittie said. “I know how important she is to Kansas State women’s basketball. Shalee feels like she is going to go and maybe do some different things. We had a good conversation. I told her to come back any time.”

For many of the players, it was tough to see Lehning go. Freshman guard Leticia Romero, who was the Wildcats leading scorer in her first year, admitted that it will be tough to not have Lehning around.

“I’m not going to lie, (Lehning) was one of the reasons I came here to K-State,” Romero said.

As of right now, there has not been any word on whether any of the current K-State players will transfer or leave school. They bond between the teammates appears to be strong enough to withstand a coaching change.

“I came for the coaches, but when I met my teammates here,” Romero said. “I’m so happy with them, we are a family. When it happened, everything crosses your mind with a new coach. You don’t know anything, so there’s a lot of uncertainty, but I wanted to wait and see.” 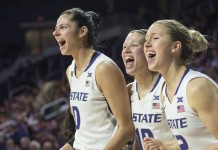