Home Community Opinion Opinion: E-cigarettes prove to be no better than regular cigarettes in some...

There are different types of smokers in this world. Most people know at least one person who currently smokes or used to smoke. People who smoke can often be categorized into a few groups.

Some are low-key and don’t lead on that they smoke. On the flip side, there are some tobacco smokers who smell like they bathe in cigarettes.

Perhaps one of the things that all of these people struggle with are the facts and misconceptions of smoking. First and foremost, anyone who says all e-cigarettes are not addictive is lying to themselves and others. Though there are some flavors that do not contain nicotine, the second listed ingredient (meaning the second most prominent ingredient in most e-cigarette flavors) is nicotine. Nicotine is the same addictive chemical found in tobacco cigarettes that cause some to endlessly chain-smoke in hopes of satisfying their cravings.

According to researchers at the University of California, San Francisco, based on the results of a survey conducted in November 2011 and again in November 2012 of 950 smokers, those who started off smoking e-cigarettes were no more likely to quit smoking than those who were tobacco smokers and switched to e-cigarettes or those who just smoked regular tobacco cigarettes.

This behavior is scary above all else. But it almost seems this behavior is being encouraged when e-cigarette flavors are attractive to people under the age of 18.

When e-cigarettes are advertised to having flavors like Skittles, Mountain Dew, sugar cookie and gummy bears, what is discouraging young children from trying these things? The correct answer is nothing. When these e-cigarettes are getting into the hands of young people, it is creating a new breed of younger and younger nicotine addicts who aren’t even aware of it.

According to an NPR story by Jenny Lei Bolario from Feb. 17, students in high schools and middle schools are smoking e-cigarettes in schools and purchasing their devices legally. Many states don’t have set age limits on those who can purchase e-cigarettes and there is no federal age restriction, so children can easily turn to the Internet to purchase the devices.

Additionally, due to the lack of any real legal restrictions on e-cigarettes, many who want to take a electronic drag can get away with doing so indoors, including in clubs, restaurants, bars and even classrooms. There are few things less annoying than a student smoking an e-cigarette while in a classroom.

As the research continues to surface about e-cigarettes, it doesn’t make for a very promising future. At best, it looks grim as this movement of e-cigarettes is recruiting an army of younger and younger soldiers addicted to its poison. However, what needs to be considered are the individual choices we all make. If you choose to start smoking tobacco cigarettes or e-cigarettes, just know how damaging both are.

Keep these things in mind the next time you consider starting or switching to smoke e-cigarettes.

Jakki Forester is a junior in journalism and American ethnic studies. Please send all comments to opinion@kstatecollegian.com. 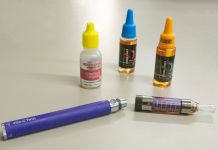