A week after having their 12-game win streak snapped, the K-State baseball team (17-10, 2-1 Big 12) looked to right the ship in Omaha, Neb. over the weekend, taking two of three games against the Creighton Bluejays (12-9-1).

While the weekend was a successful one, it was very close to being a sweep, as the team’s lone loss came on Friday night when their ninth inning rally fell one run short in a 4-3 loss. A bases loaded single from senior center fielder Ross Kivett drove in two runs and cut the Bluejays lead to a lone run, but the Wildcats did not capitalize as their next two batters could not bring home another runner.

The offense was able to put nine hits on the board, but stranded 11 runners in the game, eight of which were in the crucial last four innings of the game. Kivett had a good day overall, with a single, a double, two RBIs, a run scored, and two walks drawn in five trips to the plate. Senior catcher Blair DeBord and junior second baseman Carter Yagi also added two hits each.

Sophomore starter Levi MaVorhis tossed 5 and one-third innings with four runs allowed – two earned – off seven hits with three strikeouts and a walk, taking the loss to drop him to 3-3 this season. Sophomore Jake Matthys finished the game with 2 and two-third scoreless innings and three strikeouts to continue his up-and-down season.

On Saturday, K-State rebounded from the disappointing loss to take the second game 8-5 thanks to a big day from the offense, which drew a cumulative eight walks and banged out 11 hits. Senior third baseman R.J. Santigate led all players with three hits, while Kivett, junior shortstop Austin Fisher, and freshman designated hitter Tanner DeVinny each had two hits. DeVinny also tied a career high with three runs driven in on the day.

Senior starter Jared Moore moved to 5-1 on the season with the win despite delivering a lackluster performance in allowing five runs in five innings. However, after a scoreless inning from freshman Jake Whaley, sophomore reliever Ethan Landon came through huge for the Wildcats with three perfect innings to close out the game for his first career save.

Sunday’s rubber match also went to the Wildcats, thanks to another great performance from starter Nate Griep, who threw seven innings and allowed two runs off seven hits with five punch outs and just a single walk in an 8-2 victory. The freshman is now a perfect 3-0 this season and has delivered some solid performances since being named a weekend starter by head coach Brad Hill.

Freshman Jordan Floyd and Matthys each pitched a scoreless inning of relief to keep the Bluejays at arms distance to secure the win.

Santigate had another great day at the plate with three more hits while Kivett and junior right fielder Mitch Meyer had two hits apiece. Meyer also knocked in a team-high two RBIs in the game.

K-State will return to action on Tuesday as they remain in Omaha to face the University of Nebraska-Omaha before returning to Manhattan for a three-game series against in-state rival Kansas for conference play. 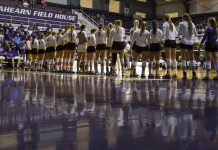 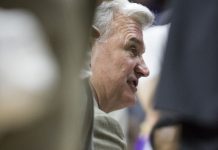 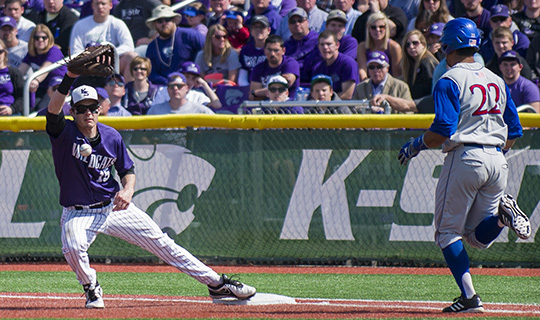