The K-State women’s golf team played in the Mountain View Collegiate in Tuscon, Ariz. over the weekend. After a solid outing on Friday, the Wildcats struggled in their final round and finished in eighth place. The cats posted a total score of 890, which was 16 strokes more than the University of Nebraska, who won the tournament. 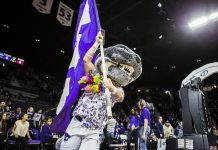 Busy week in store for K-State sports, including track and field’s Big 12 Championship 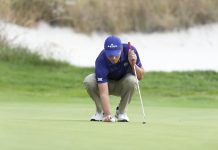