Fresh off a couple of weekend wins against Creighton, the K-State baseball team (17-10, 1-2 Big 12) will play the University of Nebraska-Omaha (12-9) tonight in Werner Park, home of the Kansas City Royals’ AAA ball club.

After dropping two straight games to start Big 12 play, the Wildcats are beginning to regain their stride. K-State has now won four of their last five games entering the game tonight. A big reason for the strong stretch has been because of the play of one of their seniors.

It would be hard for senior center fielder Ross Kivett to have better momentum heading into the game. He was named the Big 12 Player of the Week on Tuesday for his stellar play last week. Last Tuesday, he hit for the cycle, becoming the third Wildcat ever and first in 17 years to accomplish the feat. He followed up his slice of history with three straight two-hit games over the weekend against Creighton.

His numbers in the four games were nothing short of spectacular: a .588 batting average, .600 on-base percentage, 1.059 slugging percentage, seven RBI, seven runs scored, 18 total bases and three doubles, all of which were tops among Big 12 players for the week.

Kivett is now hitting at a .376 clip on the season, which is second on the team behind senior third baseman R.J. Santigate, who sits at .380. The team is hitting .305 all together, with six players over the .300 mark.

K-State will start Colton Kalmus against the Mavericks after delivering a solid performance against Nebraska last Wednesday. Against the Cornhuskers, the freshman righty tossed five innings with two runs allowed – one earned – off seven hits with three strikeouts and a walk. The Rowlett, Texas native is 2-1 with a 4.80 ERA this season with 10 strikeouts in 15 innings pitched in seven appearances, including two starts.

The Mavericks are hitting .279 as a team, but have six players all hitting over .300, led by Alex Schultz and Cole Gruber. Schultz is batting a team-high .364 with a .449 on-base percentage. Gruber is batting .354 and leads the team with seven stolen bases. Clayton Taylor has also had a great start to the season, leading the team in slugging percentage (.644), seven doubles and four home runs.

The Wildcats will return to Manhattan this weekend for a weekend series against Kansas at Tointon Family Stadium. 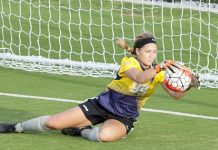