During the public comments part of Tuesday’s city commission meeting, business owners from the north end of 3rd Street petitioned commissioners to update their area of town. While this area of town has been on the redevelopment plan for many years, the commission is trying to focus their time and money on areas where intersections are failing or need immediate attention, said Jason Hilgers, assistant city manager.

Mike Hufnagel, owner of Dairy Queen, 1015 N. 3rd St., spoke about his frustration with the redevelopment. Hufnagel’s Dairy Queen has been in the same building for the entire 60 years they have been in Manhattan. Hufnagel and Hilgers have been meeting on an annual basis to discuss the prospect of redevelopment.

“I’ve got Dairy Queen International wondering why I’m still in a 60-year-old building when every other fast food place in Manhattan is in a brand new building,” said Hufnagel. “Time is of the essence if we’re going to survive.”

Additionally, commissioners finalized their approval of the economic development application presented by Tallgrass Brewing Company, 8845 Quail Lane Amendments were made due to restrictions based on the rezoning of the property.

Approval was also given for city administration to submit requests for project funding to the Kansas Department of Transportation for re-constructing intersections. Intersections on the plan include Amherst and Kansas Highway 113, Ehlers Road and U.S. Highway 24, and Retail Drive and U.S. Highway 24.

Commissioners Rich Jankovich and Karen McCulloh volunteered on April 1 with the RSVP of the Flint Hills Volunteer Center’s Cookie Brigade. The cookies are baked and packaged by volunteers before being deliver to soldiers with the U.S.O.

Candice McIntosh, coordinator for Schools of Hope, a RSVP volunteering tutoring program, spoke about the advantages of living in a community so dedicated to volunteering.

“We have 356 volunteers here in our community that gave 36,000 unduplicated hours back to our community,” McIntosh said. “Last year, the return on investment for the community was over $400,000.”

“It’s really easy to volunteer and help us out,” Nick Jankovich said. “Or, if you just want to come out and watch, it’s a pretty good time. I’ve never seen somebody walk away from a bike race not amazed that bikes are going 40 miles per hour down the road.”

People interested in the races, volunteering or hosting a team of cyclists can contact the team at ksucycling@gmail.com 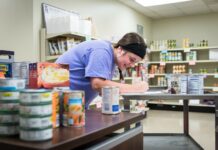