Sporting Kansas City stole a late goal on the road Saturday to top the Colorado Rapids 3-2 in front of almost 1,000 visiting fans who made the near-600 mile trip out west.

Forward Dom Dwyer provided the late-game heroics for the defending MLS Cup champions, blasting a rocket right above the head of Rapids goalkeeper John Berner in the 92nd minute.

“I don’t think that we were firing on all cylinders today, but what I do think is that we stayed and at least tried to keep playing,” Sporting KC manager Peter Vermes said after Saturday’s match. “We kept trying to push it to stay in there. At the end, we scored a great third goal, and I thought the guys managed the game thereafter.”

Sporting KC had to play from behind after going down 2-1 in the 78th minute after the Rapids scored their second penalty kick of the match. However, just a minute later, midfielder Benny Feilhaber, who committed the foul that led to penalty, found the back of the net with a scrambled rebound inside the box to equal the scoreline.

The momentum continued to the 85th minute when Colorado defender Marvell Wynne was sent off after receiving his second yellow card on the day. The 10-manned Rapids side tried desperately to salvage the draw, but Sporting KC and Dwyer would have the last laugh in a thrilling five-goal second half.

With Saturday’s victory, Sporting KC improves to 2-1-1 on the year. Their attention now turns to Real Salt Lake in a rematch of last year’s MLS Cup final. Real Salt Lake, 2-0-2, are coming off an impressive 3-0 shutout against the big offseason spenders of Toronto FC and will be eyeing revenge after seeing the league trophy slip from their fingertips in a shootout at Sporting Park last December.

Sporting KC has made headlines recently with a number of players coming and going. Monday, the club announced that they have waived defender Mechack Jerome to create a third roster opening. The news comes a week after the club waived fellow defender Josh Gardner.

Tuesday, Vermes confirmed that Brazilian defender Igor Julião and Spanish midfielder Victor Muñoz are training with the team. Hours later, Sporting KC confirmed the signing of Muñoz, who had previously spent eight-years in the Real Madrid Academy before coming to college in the United States.

Sporting KC and Real Salt Lake are set to kickoff from Sporting Park at 7:30 p.m. Saturday. 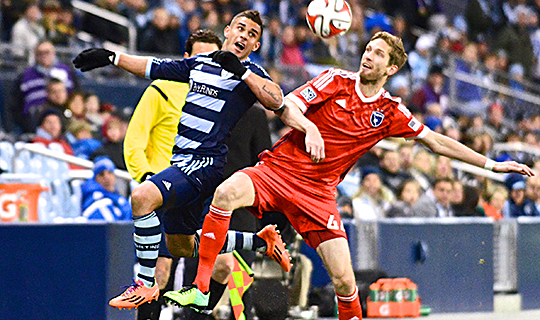