Omaha struck first in the third inning thanks to an RBI single from Brett Bass to score Alex Schultz. The Wildcats were able to jump on top in the next few innings thanks in large part to senior catcher Blair DeBord

DeBord’s leadoff single got the fifth inning started. He eventually came around to score thanks to an RBI groundout by senior center fielder Ross Kivett. Sophomore Clayton Dalrymple scored the second run of the inning after reaching on a fielder’s choice that had sent DeBord to third. The Wildcats’ left fielder was brought home by senior first baseman Shane Conlon, who had a good night at the plate despite the loss.

DeBord was involved in the next two runs for K-State, doubling home Mitch Meyer after the junior singled in the previous at bat in the sixth, and singling home sophomore designated hitter Taylor Anderson in the seventh.

K-State’s three run lead was short lived, however, as the Mavericks struck for three runs in the bottom of the seventh inning.

With the game tied at 4-4, Dalrymple singled home Anderson in the top of the ninth for the go-ahead run, but once again the lead was a fleeting one for the Wildcats, as Omaha’s Clayton Taylor hit a leadoff home run to tie up the game in the bottom of the frame of sophomore closer Jake Matthys.

Matthys fared little better in the tenth inning, walking Cole Gruber with two outs and allowing him to score from second after a stolen base on a single from Schultz.

Freshman Colton Kalmus started the game on the mound, pitching two scoreless innings with a hit, a strikeout, and two walks allowed, before Landon Busch entered for the next two innings. The sophomore allowed a run off three hits with three punch outs and two walks allowed on a planned staff night, in which the team was planning to use more pitchers than usual.

After two perfect innings from freshman Jake Fromson, freshman Jordan Floyd entered the game, giving up the three seventh inning runs in one-third of an inning pitched. Freshman Ethan Landon tossed 1 2/3 scoreless innings before turning the ball over to Matthys, who gave up the tying and walk-off runs that led to the loss.

The Wildcats had a decent night at the plate, especially Conlon, who had four hits including a double in the first inning. Meyer and junior shortstop Austin Fisher each had two-hit games for K-State as the offense had 14 hits in the contest.

The Wildcats return to Manhattan for a weekend series against Kansas this Friday through Sunday, and will continue in-state play with a game against Wichita State next Tuesday. 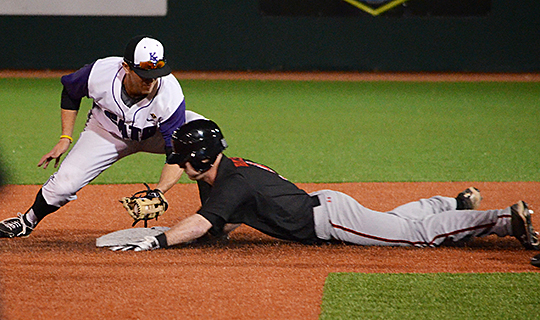