As college baseball nears the halfway point of its season, K-State dives into conference play head first, with every weekend series from here on out against a Big 12 foe.

Head coach Brad Hill says that the best word to describe his team’s performance so far this season is inconsistency.

After a rough 1-7 start to the season on a West Coast road trip, the team has fought to get their record not only just above .500, but well above that mark.

“It’s been a grind,” senior catcher Blair DeBord said of the season so far. “We didn’t get off to the start we exactly wanted. We got back on it when we got back to Manhattan, we had some road woes.”

There may be no better place to start the most important stretch of the 2014 season than at home in Manhattan and there may not be better incentive to win than against the Jayhawks.

K-State has received some quality innings from their starting pitching this season, which was a position that often struggled last season, and Hill is pleased with the way they have delivered on the mound so far this season.

“Those guys have done a good job,” Hill said of his team. “Levi [MaVorhis] has been very consistent. Jared [Moore] got off to a good start, I’d like to see him have a bounce back on Saturday, and be a little more consistent for us and get us deeper into the game, and Nate [Griep] had obviously some pretty solid outings.”

MaVorhis, a sophomore, has served as the team’s number one starter this season pitching on Friday nights, and has stepped up as a big leader for the pitching staff. With a 3-3 record and a 3.32 ERA in seven starts, he has done a good job of keeping the Wildcats in the game week in and week out.

Now in his senior campaign, Moore will start on Saturday, and despite getting roughed up last weekend against Creighton where he gave up five runs in five innings, he has delivered several quality starts this season, with a 5-1 record and a 4.15 ERA.

As solid as MaVorhis and Moore have been so far, the story of the rotation, and maybe even the team, has been Griep. After losing last season to Tommy John surgery, the redshirt freshman has excelled on the mound to the tune of a 3-0 record and 1.67 ERA. The righty has held batters to a .186 average and surrendered just four extra base hits all year in 32 1/3 innings.

Offensively, the Wildcats are starting to find a groove, hitting .306 as a team. Senior third baseman R.J. Santigate and junior shortstop Austin Fisher lead the squad with .362 averages at the plate, while senior center fielder Ross Kivett is right behind them at .355. 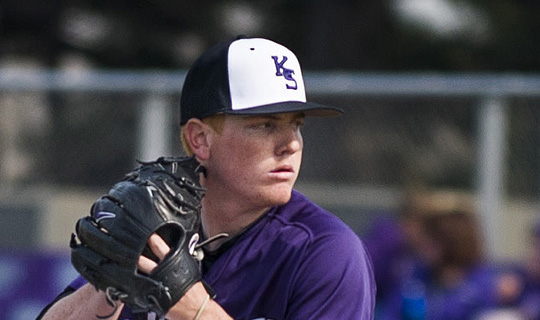