Over the weekend, the K-State Wildcats hosted their in-state rival, the Kansas Jayhawks. Despite winning the first game of the series 10-0, they went on to drop the next two games. They now have the opportunity to bounce back as they wrap up their home stand by hosting the Wichita State Shockers tonight.

“We need to get this thing turned around in a hurry,” K-State head coach Brad Hill said following the loss on Sunday. “Probably more than anything else, the mental approach. Making sure that we’re believing that we’re still a good team and come out with the right mentality.”

After the Wildcats rattled off 12 straight wins, they are just 5-6 in their last 11 games. K-State had not lost at home prior to last weekend. They are now 11-2 when playing in front of their home fans this season.

Despite the sluggish stretch, one bright spot for the Wildcats has been the play of freshman catcher and designated hitter Tanner DeVinny. He was named co-Big 12 Newcomer of the Week after his strong series against the Jayhawks. On Friday, DeVinny became the first K-State freshman since Jared King in 2011 to hit a home run. He has now recorded a hit in his last 15 games.

“(DeVinny) just kind of goes out there, has that freshman mentality and just doesn’t really worry about a whole lot,” Hill said. “He’s a freshman just trying to survive and sometimes that’s just the best mode to be in ’cause you don’t think too much.”

Redshirt freshman Colton Kalmus will be on the bump for the Wildcats against the Shockers. The freshman is 2-1 this season with a 4.24 ERA.

The Wildcats enter with a record of 18-13. Tonight’s game is just the first of two games that the Wildcats will play mid-week. On Wednesday, the Wildcats will turn right back around and travel to Lincoln to take on the Nebraska Cornhuskers.

First pitch is scheduled for 6:30 p.m. at Tointon Family Stadium.

Shockers fell victim to the Madness 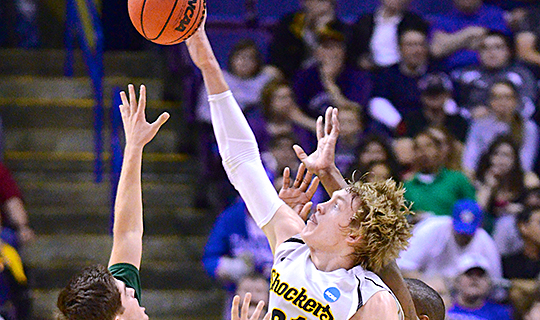 Shockers fell victim to the Madness