“We
have a lot of expectations for longboarding in Manhattan,” said Corbin Moore, junior in mechanical engineering and co-president of the Longboarding Club.

The original idea for Breezy Bomb began two years ago, during Moore’s and Shane Snavely, senior in milling science and management, first year as co-presidents of the club.

“There was one day where Shane and I talked about having a downhill event out at (Tuttle Creek Cove Park),” Moore said. “It really all just fell into place.”

Moore, Snavely and the rest of the Longboarding Club spent months preparing and organizing for the event. They put up fliers around the area and drew chalk advertisements across K-State’s sidewalks. They also contacted Tuttle Creek Cove Park rangers, in order to ensure that the park would be closed off and made safe for the event. The club spent a considerable amount of money in preparation for Breezy Bomb 2013, all without knowing what to expect.

“It was a far-fetched idea and we had no idea if anyone would show up,” Snavely said.

In its first year, Breezy Bomb 2013 turned out to be a big success.

“We had skaters come in from six to seven different states, photographers and people lining the hills,” Snavely said. “People were coming up to us all day, saying ‘Thank you for doing this. You should make this an annual event.’ I have never been so happy.”

Breezy Bomb 2014 promises to be bigger and better than its predecessor. Having gotten started much earlier this year, the Longboarding Club is adding some new elements to the event, including expanding its duration to last for two days, offering free camping on Saturday night to all skaters and interested onlookers and incorporating new and exciting competitions that will challenge the competitors and excite the crowd.

“It’s going to be a circus of events,” Moore said. “We are doing the downhill race, the slide jam, best trick, longest manual, biggest standee and biggest topside.”

Easily the event’s most challenging and well-known competition, the downhill race, will take place on a stretch of road at Tuttle Creek Cove Park that spans about three-quarters of a mile. Emphasis will be placed on speed.

A variety of prizes will be handed out to the winners for each of the competitions, which will be another of this year’s improvements. Multiple sponsors will be sending the Longboarding Club free gear – including new wheels, boards and trucks – to give away at the event. Big Poppi Bicycle Company will serve as a local sponsor, while several larger companies, including Rayne Longboards, Northern Pine Longboards, Landyachtz Skateboards and Red Bull, will also sponsor.

“Events are often measured by who is sponsoring,” said Jeb Stewart, sophomore in biology and anthropology, and the treasurer of the Longboarding Club. “If you have a lot of tiny, local sponsors, then you will get a large local turnout in terms of riders. But, if you have got bigger companies like Rayne, Comet, and Metro slapped on your banners, then it comes off as more legitimate and people from all over are more likely to come to your event.”

This idea of blending local and larger sponsors falls in line with exactly what the Longboarding Club is trying to accomplish by hosting Breezy Bomb 2014.

“Our goal was to start longbaording in this community and let everyone have as much fun as they could with it,” Moore said. “We have events now. We are pulling skaters from other states into Manhattan for events. That hasn’t happened before. It’s growing exponentially every day.”

The blending of the growing longboarding communities in Manhattan and the Midwest is a goal both Snavely and Moore said they envisioned when they began serving as presidents of the Longboarding Club.

“The community is building and that’s what we will always continue to do,” Snavely said. “We are here to build a community and are doing it in a way that we have come to love. It’s becoming long term.”

They said their hope is that Breezy Bomb will continue being a major catalyst for this budding community. The turnout on Saturday should be a good indication of things to come for longboarding in Manhattan, Moore said.

“(Breezy Bomb) has become an opportunity that we cannot pass up,” Moore said. “I’m going to wake up (on Saturday) and it is going to be like Christmas morning.” 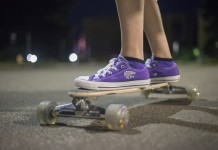 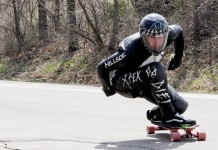