1867: Enrollment in military training corps is required for freshmen and sophomore students due to a faculty ruling.

1868: A two-year course of military instruction for men is required. Later, advanced courses were available for junior and senior members.

1893: Students could chose between military drills or calisthenics. Drill participation dropped to about half.

1894: Board of Regents makes military training mandatory for all physically qualified male students below the third academic year.

1902: The War Department issues General order Number 94 to establish a program of drill and classes. Uniforms were changed at that time to match the West Point Gray uniforms.

1906: Lt. J.G. Warswick becomes the first Kansas State Agricultural College cadet to give his life on July 22 against the Philippine rebels.

1912: The military department moved from the old Armory building, where Cardwell Hall is now, to new quarters in Nichols Gymnasium.

1916: The National Defense Act is passed by Congress that establishes ROTC; then, later called the Student Army Training Corps, SATC.

1917: The Corps grow so large that they must hire their first full time secretary, S.P. Winters

1918: The SATC program is shortly disbanded after the signing of the Armistice.

1919: SATC returns to campus in the spring. Around the same time, an influenza outbreak occurs on campus, shutting the entire school down for a short time. Two hundred fifty-seven cadets got sick, and four died as a result of the epidemic.

1939-1945: Kansas State Agricultural College sends 1,200 enlisted men and 200 ROTC officers into World War II. The memorial at Danforth Chapel commemorates the 243 individuals who died during WWII and the Korean War.

1943: The Military Science Department and Army ROTC move to its current building, now called General Richard B. Myers Hall, the only building completed on campus during WWII.

1949: The Pershing Rifles Company G-7, an element of ROTC, becomes the first student organization on campus to integrate an African-American student into their organization with the membership of Cadet Robert Thompson.

1951: A senior division of the Air Force ROTC unit is established on May 9 and designated Detachment 270 after the Air Fore formed from the Army’s Air Corps. They occupied the same building as Army ROTC.

1965: The Kansas state legislature repeals the mandatory enrollment and ROTC becomes elective for all students. Thirteen hundred cadets are enrolled.

1968: A fire guts the former military science quarters, Nichols Hall. Afterward, the university began to employ fire guards, a part of the ROTC program, to patrol the campus at night to control suspicious happenings.

2006: The military science building is renamed Gen. Richard Myers Hall. Myers was a 1965 K-State alumnus who served as chairman as Joint Chiefs of Staff and principal military adviser to Secretary of Defense Donald Rumsfeld, President George W. Bush and the National Security Council.

2008: The first female general in the Kansas National Guard, Brigadier Gen. Deborah S. Rose, speaks to K-State Air Force ROTC students about her position as joint command and her success as an officer.

2010: The K-State Pershing Rifles Company G-7 is reactivated after being disbanded previously due to issues of disrespect and lack of interest.

2011: “G.I. Jobs” magazine lists K-State in the top 15 percent of colleges that cater to the military.

2013: Thirteen ROTC programs across the nation at several major universities in the South and Midwest regions close over the next two years; K-State’s program remains strong. The K-State ROTC program has produced an average of 17 officers a year since 1988, above the national average. 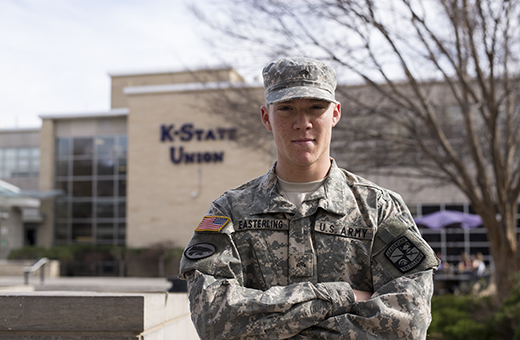