“Any win is a big win for us right now,” senior second baseman Ross Kivett said after the game. “We scuffled a little bit, but a lot of mentally tough kids in that locker room and we’ve been preaching picking each other up. Good teams go through stretches too. We don’t by any means think we’re out of this, and we’re just trying to play good baseball every day.”

As he has been in many of his starts this season, sophomore starter Levi MaVorhis was a huge factor in the win. MaVorhis limited the Bears to two runs off seven hits over eight innings, walking one and striking out none.

“That guy’s great,” Kivett said of MaVorhis. “He’s good every week. He’s been our most consistent guy, and we look forward to every time he pitches because he gives us a chance. I can’t speak highly enough for him.”

The offense also enjoyed a good night, banging out 11 hits with four players registering more than one in the contest. Freshman first baseman Tyler Stover, making his second straight start at first base, led all batters with three hits in the contest, while fellow freshman Max Brown went 2-for-2 with a mammoth two-run homer in the seventh inning to give the Wildcats some insurance runs.

Through three innings, Baylor held a 2-0 lead and MaVorhis looked a little shaky, but he found his groove and kept the Bears off the board as the offense heated up with five two-out runs in the sixth inning to jump ahead.

“Levi battling through those first three innings, he wasn’t real sharp those first three innings, and then he really settled in and pitched well for us,” head coach Brad Hill said of his starter. “I’m glad he really settled in, it was a good job by him. Good pitchers will tend to do that sometimes, you know you kind of battle and aren’t real sharp, and then he just found it. He found it around the fourth inning, started getting more ground balls and got ahead in the count.”

K-State will play Baylor again tomorrow at 6 p.m., with the series finale on Saturday at 7 p.m. 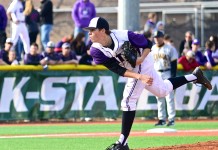