Two K-State students represented the Wildcats in
the 2014 Cabela’s Collegiate Big Bass Bash at Kentucky Lake in Paris, Tenn on April 4-6, placing in the top twenty.

Sam
Starr, junior in political science, and Alex Fulkerson, senior in wildlife and
outdoor enterprise management, finished 13th in the event out of 200 competitors. The pair helped move the K-State Fishing Team’s overall ranking to No. 10 in the nation.

“It’s a tough competition, but the nice thing about is that all you need to win is one good bite,” Fulkerson said.

The challenge behind Cabela’s Collegiate Big Bass Bash was the size of the body of water. Kentucky Lake stretches for more than 180 miles and covers approximately 160,300 acres in western Kentucky and Tennessee. Competitors had to decide which section of the lake would have the most fish to gain an advantage in the competition.

Starr and Fulkerson prepared for the competition by fishing at Milford Lake, located near Junction City, and doing research on the area where they would be fishing at Kentucky Lake.

“We do a lot of research beforehand,” Starr said. “We use Navionics a lot. It is a mapping system and it shows depth contours and structure.”

Both students are part of the K-State Fishing Team. The team travels all over the U.S. and competes with about 600 other colleges across the nation. Anyone can be a part of the team, but not everyone gets to travel; the team has four team qualifiers to see who gets to attend tournaments.

Unlike some other universities that provide equipment to their students, K-State’s team is responsible for supplying their own boats and fishing equipment for competitions. The equipment alone can weigh more than 200 pounds.

“We hold a fundraiser tournament every spring at Milford Lake so we can afford to send teams,” Tyler Hetzel, sophomore in business and president of the K-State Fishing Team, said.

K-State’s team has some advantages over other teams because they are from Kansas.

“Everyone has their strengths. We are better in dirty water since we are from Kansas,” Starr said. “We went to a competition last year in a mountain lake in Georgia, where you could see the bottom in 20-foot water. You just have to adapt.”

The team’s next competition will be the BoatUS Collegiate Bass Fishing Championship at Pickwick Lake in Florence, Ala., May 21-23.

“There is just something about being on the water at sunrise that makes life seem so simple,” Hetzel said. “It’s a magical thing to experience, and catching a few fish and doing something you have worked towards your whole life makes it that much better.” 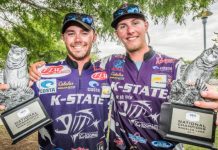