Willie the Wildcat is a K-State celebrity. Fans love his playful personality, and the secret nature of the student identity under the mascot head creates a fascinated speculation by many.

Alex Edwards, K-State ’12 alumnus of mass communications, was the mascot from spring 2008 to spring 2012. Edwards said his secret identity of Willie contributed to the feeling of being a super hero.

“Everyone knows you, wants to be around you and you sign autographs,” Edwards said. “Then you change back, walk to class and no one has any idea that you took a picture with them 15 minutes ago. It’s kind of mind-blowing.”

However, the mascot Edwards portrayed had not always been the one to energize crowds of K-Staters. Since the idea of having a university mascot began in 1906, K-State had 91 years and five generations of Willies before the current Powercat was born.

The first known mascot appeared in 1906 when the university was known as Kansas State Agricultural College. For three years Boscoe, a black labrador, entertained more than 1,000 enrolled students at football and baseball games.

Following Boscoe, KSAC had another live mascot: Touchdown, the bobcat. In 1922, KSAC alumni Herbert R. Groome and John E. McCoy, veterinarians in Twin Falls, Idaho, donated “Touchdown I” to the college shortly after the animal was nursed back to health under their care. Touchdown I died from pneumonia soon after his arrival to his new home. Another bobcat, Touchdown II, quickly replaced him, and so on and so forth until the lineage ended with Touchdown XI in 1978.

That first wildcat was named “Sparky.” It had red-brown fur and black stripes. Andersen, a 1955 K-State alumna, remains the only woman and non-college student to don a Wildcat costume. Adrea’s husband, Gene, said he believes it was because Adrea’s father owned the Cantina, a then-popular hangout for college athletes, that she had the opportunity to make history.

“Adrea was a junior in high school when the football coach’s wife asked her if she would be interested,” Gene said. “They designed the costume and everything. It was a great start and she ended up being a K-State cheerleader.”

Following Andersen, fraternity members of Sigma Chi took on the responsibility of being Willie. This second generation mascot was purple and had large, cartoonish ears that resembled Mickey Mouse.

Loren Pauls, student reporter for The Collegian, was the first to name K-State’s mascot Willie. It was first referenced in his Jan. 10, 1964 article, after the Wildcats had a 60-59 basketball loss to the Colorado Buffaloes in Ahearn Field House.

“The crowd’s fresh burst of enthusiasm signaled the birth of a new mascot,” Pauls said in his article. “Who may be called, for lack of a better name, Willie Wildcat.”

In 1967, Willie received a makeover from sculptor Jim Hagan. The new, fierce, third-generation Willie was created with real coyote and wolf hair. The first head lasted 13 years until 1980, when Hagan was asked to create a replacement.

There was one more version of Willie the Wildcat from 1994-96. This fifth generation has been deemed the last pre-Powercat Willie.

The sixth and most current generation Willie began with head football coach Bill Snyder’s entrance to the sports program in 1989. Tom Bookwalter, Kansas native and instructor of art, created the Powercat logo for Snyder. In 1997, the “21st century” Willie was created with faux gray fur and two white stripes to resemble Snyder’s powercat.

Selections for Willie are held through the cheer department. Secrecy is a requirement each male student who dons the uniform and 5 pound head has to agree to.

Although there have been multiple “Willies” over the decades, alumni and students alike share a common love for the spirited cat, whether it is for their entire life or since the start of their college career. Kara Godebu, sophomore in business administration, she said she constantly brags about the mascot to everyone she knows.

“I love Willie the Wildcat, because he represents K-State and what we stand for: fun, spirit, pride and family,” Godebu said. “Willie is such a celebrity that I get starstruck. He is part of the K-State family.” 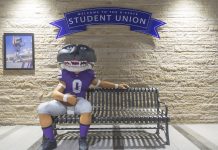 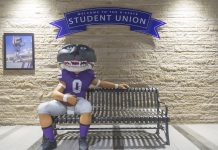 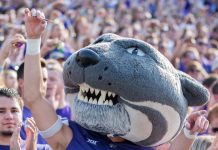