For Kendall Tompkins, open doors literally helped her to where she is at K-State today. Now, the sophomore in fine arts is opening her own, metaphorical doors on campus.

“Everyone is the friendliest people you’ll meet at K-State,” Tompkins said. “It’s the little things. People don’t always hold the door open for you everywhere you go, but here, people don’t even think twice about it. It can really change your day.”

Tompkins said the decision to attend K-State wasn’t immediate, that is until she stepped on campus.

“I was actually planning on going out of state,” she said. “I wanted to go to Oregon. K-State was the only college I looked at near home (Shawnee). I immediately loved it. I decided to go here.”

The “K-State experience” started for Tompkins before she even enrolled, she said.

“I remember how nice everyone was,” Tompkins said. “My tour guide, as he was showing everyone around, everybody who passed by was saying ‘hi’ to him. He didn’t even know everyone, but everyone was really nice. I thought that was cool.”

Transition period
As a freshman, Tompkins said she took some time to find her place at the university.

Last spring, Tompkins joined Zeta Tau Alpha sorority and has since joined the K-State Singers, both of which are opportunities she said she appreciates.

“I found my group of people,” she said. “I’ve become a lot less scared to branch out and meet new people. I’ve realized to go out and try to meet a new person everyday. That’s been the most impactful … just how easy it is to meet new people and make friends.”

The university’s atmosphere and support was helpful, Tompkins said.

“This year, I’ve really tried to branch out and try different things,” she said. “They make it really easy here. Everyone is always encouraged to go out and try stuff. That is definitely one thing I really love about here.”

Passion for K-State, music
Another way Tompkins has gotten involved was by representing her sorority at the Delta Upsilon fraternity and Union Program Council’s Miss K-State competition earlier this month. During the competition, Tompkins performed her self-written song “More Than Just Four Years,” a song about what K-State means to her.

“I wanted something that would really impact the audience and be something that everyone could relate to,” she said. “That’s why I made it about K-State, because I know everyone here feels the same way.”

Tompkins accompanied the light, happy piece on her guitar, an instrument she picked up her senior year of high school.

“I’ve been singing since I was born,” she said. “I love singing. It wasn’t until my senior year of high school that I bought a guitar and taught myself. I played around a little bit, watched some YouTube videos. I’ve never taken lessons or anything, but it’s a hobby.”

The song garnered cheers and applause, and a few tears from the audience, including Tompkins’ dad.

Enjoy remaining time
Tompkins’ K-State experience isn’t over and she plans to make the most of it. She said she hopes to apply to the graphic design program next spring and be able to serve as a mentor for students, because she has had such strong mentors so far.

What is most important about college, Tompkins said, is to take advantage of the opportunities that are available.

“Get out there and do it,” she said. “You are only going to regret what you don’t do, not what you do. You can never try too many things. No regrets.” 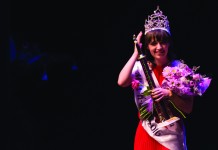 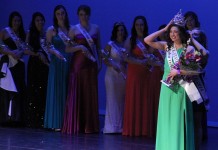