Ryan Mueller entered 2013 as a redshirt junior that was relatively unnoticed beyond the city of Manhattan. Now in 2014, Mueller is a second-team All-American defensive end who garners the attention of all opponents.

“Turning the page and realizing that nobody cares about what you did last year (is the next step),” Mueller said. “It is all about now; playing the best you can now and proving that you can do it again.”

It’s hard for many to just turn the page after Mueller’s breakout season last year. The former walk-on tied the K-State single-season record for sacks in his junior campaign with 11.5. Those 11.5 sacks were the eighth most in the nation, and more sacks than four FBS teams accumulated all season. Mueller also tied another K-State record with three sacks against Texas Tech in Lubbock, Texas. He had arguably the best Wildcat play all season with a strip-sack of Baylor’s Bryce Petty. Now, after having such a prolific season, Mueller will have to deal with the expectations that come with being an All-American.

Being an All-American does not guarantee success. Neither preseason All-Americans last season recorded more than eight sacks. Mueller will have to break K-State records to top what he did last season. It is unfair to expect a player to do that, but if he can the Wildcat defense could be fearsome. With six new defensive starters, Mueller will only have production if those around him grow up quickly. That can happen with a supreme defensive leader.

K-State will not have to look hard this season to find the leader of the front seven. Mueller’s on-the-field production has been noticed in the locker room, and produced tangible results. He was named a team representative for the 2014. While no one but the team knows what goes on behind closed doors, Mueller seemingly leads by example. This goes a long way among players, and drives them to constantly get better.

Mueller’s pressure on the quarterback not only affects the play if it results in a sack. If a quarterback panics because of Mueller, he could throw the ball away before the play develops – or even throw an interception. That pressure makes a young secondary (much like K-State’s in 2014) look very good.

“I am definitely confident, and the coaching staff here, especially Coach (Chris) Dawson, have got me mentally and physically prepared for the season and the grind that goes on,” Mueller said. “I am definitely confident. Every summer I just try to improve and get bigger, faster and stronger. So far I have done that. I am just ready for the season.”

The affect that Mueller could have on this season for K-State cannot be understated. He could make the defense among the top in the Big 12 conference. If he does not put the defense on his back, they could get crushed. Mueller must be an effective player for K-State if they want to reach new heights this season. 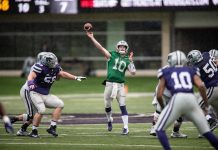 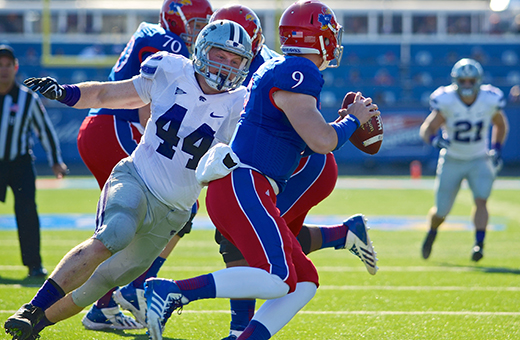