If you look at the press box glass of the almost year-old West Stadium Center at Bill Snyder Family Stadium, you’ll see the reflections of purple letters that spell out the names of the Kansas State Ring of Honor Inductees. Two of the names, Veryl Switzer and David Allen, are the cream of the impressive crop that once called themselves Wildcat running backs.

While Switzer and Allen played 60 and 20 years ago, respectively, K-State’s running back prowess has still been strong in recent years. From elusive and speedy Darren Sproles in the early 2000s, to human wrecking ball Daniel Thomas at the turn of the decade and culminating last year in the steady strength and speed of John Hubert, K-State has rarely found themselves wondering, “who’s next?”

The most viable options competing at the Spring Game for the upcoming season are senior DeMarcus Robinson and sophomores Charles Jones and Jarvis Leverett Jr.

While K-State head coach Bill Snyder said he is pleased with some of the things he’s seen throughout spring practices, the running backs are still under evaluation, he said.

“I’m still waiting on somebody to rise above others,” Snyder said.

Very little in-game action has been seen of any of the potential running back candidates. Of the sophomores redshirted in the 2012 and 2013 seasons, neither back has seen any in-game action. Robinson has played in a total of six games in his collegiate career and totaled 45 yards.

Knowledge of Snyder’s traditional coaching methods would suggest that Robinson would be the front-runner. He has both seniority in the program and, relatively speaking, the most in-game experience, which normally is a large deciding factor in a close position battle like this. According to Snyder, however, this year’s dilemma is not as cut and dry.

“DMac (Robinson) hasn’t been on the field enough,” Snyder said, adding that Robinson had, “several things that hold him back.”

With the senior running back unable to take the helm, the focus has centered on the two sophomores who have never once taken the field in their college careers.

Little to nothing is known about what kind of running backs they are, and whether they would bring Thomas-esque power, Sproles-like finesse speed or some amalgamation of the two.

“They all run hard,” Moore said. “I really don’t see a lot of difference between them.”

As spring practice draws to a close, both sophomore backs said they feel that their game has progressed over the past month.

“I know for a fact I improved on pass (protection),” Leverett said. “Playing fast; patient, but fast. You don’t want to be reckless.”

Jones also said he feels that his pass protection, another unique aspect of K-State’s offense, has improved. Not only do you need to know how to hit your gaps and run in the open field, you must be more than proficient in pass blocking if you want to line up for Snyder’s squad, he said.

K-State running backs need to be prepared to get their hands dirty and take on some of the Big 12’s nastiest linebackers and defensive backs so their quarterback has enough time to make the play.

In the offseason, K-State picked up Blue Springs, Mo. running back Dalvin Warmack. Warmack was the only two-time winner of the Simone Award, given to the top prep football player in the Kansas City area. He is quickly gaining interest as an option for the top spot when he arrives in Manhattan in June.

“The summer program for him will be one of those learning environments,” Snyder said. “We know there is going to be a time lapse in terms of just understanding what is going on. But, when we get started in the fall, hopefully he has an awareness of responsibilities, assignments, etc. If he picks it all up, then he has a possibility of making it interesting.”

It’s much too early to speculate on the success of any of the four running backs. The Wildcats are in desperate need of one or more of them to step up and continue the rich legacy of K-State running backs. 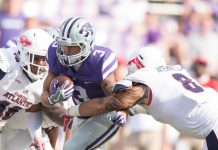