During halftime of the Spring Game on Saturday, K-State Athletics Director John Currie announced what the north end zone will look like in the near future. This will be the third phase of the Bill Snyder Family Stadium expansion plan. The project is expected to tally nearly $65 million.

“This is a day that’s been a long time coming and is a huge step forward for us and also represents another sign of Kansas State University’s and Kansas State Athletics’ commitment to be among the top echelon of intercollegiate athletics,” Currie said.

The plan for the new facility is to completely tear down the current Vanier Football Complex and build a new one from the ground up. Groundbreaking for the project is scheduled for Nov. 29, which is the Wildcats’ final home game of the 2014 season.

The new Vanier Football Complex will be approximately 106 percent bigger than the current facility, growing from 64,000 square feet to 132,000 square feet. The new feature will include a new Academic Learning Center, an Olympic-quality strength and conditioning center, and a state-of-the-art sports medicine and recovery space. The new facility is scheduled to be fully functional before the 2015 season kicks off.

“It will be a challenge, it will be a logistical challenge,” Currie said. “That’s one of the reasons that we work hard to compress this construction schedule into one offseason.”

Like the $125 million raised for the West Stadium Center expansion, which was completed last fall, all funds for the project will come from donations. A third of the $60 million gift the Vanier family made to K-State will be used toward the expansion. No university funds or tax dollars will be used on the stadium.

The new facilities will not only bolster the look of Bill Snyder Family Stadium, but will benefit recruiting as well. It also shows student-athletes that the university is supporting them.

“It’s awesome, it’s definitely going to get us more recruits here,” freshman fullback Glenn Gronkowski said. “Not just that, but the whole new press box and everything too, the training table and all that. Everything they are doing here is awesome, especially for the players. It just shows us how much they care about us.” 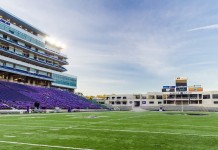 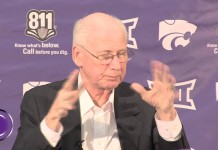