The Omaha-or-bust expectations have solidly fallen in the bust category for the K-State baseball team.

With No. 13 TCU’s ace Brandon Finnegan out for the weekend after leaving a start the week before with arm soreness, the Horned Frogs turned to Preston Morrison on Friday night, who tossed his third shutout of 2014 in a 5-0 victory over K-State.

Morrison allowed seven hits and walked just one in nine innings, striking out seven Wildcats, as the K-State offense was helpless against him, going 0-for-7 with runners in scoring position.

K-State sophomore Levi MaVorhis dropped to 5-6 on the season after allowing five runs – three earned – off nine hits and a walk while failing to strike out a batter.

Saturday’s game saw TCU take a 3-1 victory thanks to three two-out runs in the fourth inning off K-State’s Nate Griep. The freshman starter was removed in the fourth inning after allowing a run and leaving two men on base, but his reliever, freshman Jake Fromson, gave up a two-run triple that handed the Horned Frogs the win.

The offense was once again non-existent, tallying just four hits and no walks, scoring their lone run on a solo homer by senior center fielder Ross Kivett to lead off the game. Junior shortstop Austin Fisher did collect two hits on the afternoon while the rest of K-State’s batters struggled against TCU starter Tyler Alexander.

Sunday’s game got out of hand quickly. After jumping out to a 7-4 lead through four innings, the Wildcats looked to be avoiding a sweep, but seven fifth-inning runs and 10 more in the sixth from TCU gave the Horned Frogs a 21-7 lead, and the game was called short after the Wildcats failed to narrow the gap in the top of the seventh inning. Nine of the 21 runs scored by TCU were unearned, thanks to four K-State errors in the contest.

Sophomore Jake Matthys, making his first start of the season and second as a Wildcat allowed six runs – two earned – off seven hits and two walks in four innings while striking out none. Senior Jared Moore took the loss, dropping to 5-3 on the year after allowing eight runs – three earned – off six hits and a walk with two strikeouts in an inning and a third. Sophomore Jordan Witcig allowed four more runs in a third of an inning and sophomore Landon Busch allowed three more in the final third of an inning of the game.

The offense managed five hits and drew six walks, but did all their damage in two innings before a quiet end to the mercy-rule loss. Meyer led the team with two hits, while Santigate drew three walks as the team benefitted from two Horned Frogs errors to score four runs in the third inning.

Now below .500 for the first time since March 8, the Wildcats are fighting to get out of last place in the Big 12 in order to secure a spot in the Big 12 tournament. The team has six conference games left: home series against Oklahoma State and Texas in the next two weekends, and one nonconference game against Wichita State Tuesday. 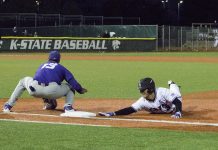 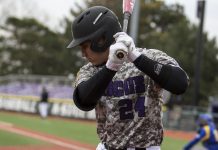 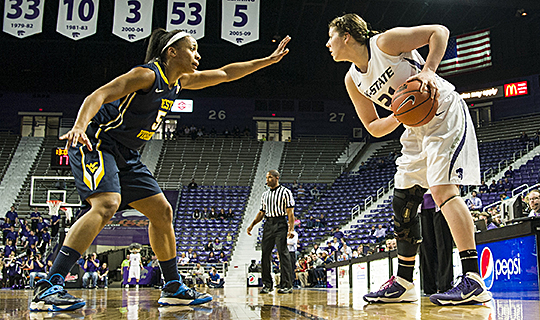