In her own words, L. Ann Domsch is there to “just be mom” at the ACACIA fraternity house, but for members of the fraternity, there is so much behind being “just mom.”

“Mom Ann” began her duties at ACACIA in 2001 after she retired as a county extension agent. She also currently works as the Operation: Military Kids coordinator at K-State.

As house mom, she assumes many roles, including some less traditional ones, she said. ACACIA members clean and help the cook, leaving Domsch open to serve in other roles. After she gets off from her “day job” in Throckmorton Hall, she spends several hours at the house.

“I’m there just to ‘be mom,’ talk and listen,” she said. “I spend a lot of time just visiting with the boys about how their day went, are they doing okay in class, if there is anything I can do for them. The guys know that I’m not going to pass on any information, so they feel free to talk to me. It’s great.”

According to Domsch, that relationship often lasts even after graduation.

“I keep in touch with a lot of the guys who have graduated,” she said. “They still feel like they can ask me questions.”

After more than a decade at the fraternity, Domsch had only praise for its members.

“They are real gentlemen,” she said. “They have good manners, and they are friendly. They care about their academics, and they still have time to do philanthropy. They treat me like a queen, and I love it.”

Domsch also said she enjoys working to fill the gap between high school and college.

“There is no one there saying ‘Did you do your homework?’ ‘Are you getting up and going to class?,'” she said. “I kind of fill that void between home and a new experience.”

Overall, Domsch said she hopes that as a house mom, she’s been able to serve as a positive and trustworthy mentor.

“I hope that I’ve helped to shape their lives a little bit and that they found someone they could confide in that was a true friend really,” she said. “Besides being a mom, I’m a friend.” 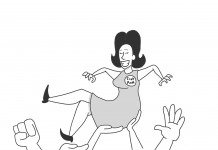