After two weekend series with disappointing results, the K-State offense powered the team to a win last night 10-4 with 15 hits at Eck Stadium in Wichita.

After falling behind 1-0 in the first inning, the Wildcats used five runs in the fourth and fifth innings to jump back on top. A four-run eighth inning put the nail in the coffin for the Shockers, thanks to two-run singles by DeBord and Yagi.

Freshman Jake Fromson pitched well in his first career start, allowing one run in three innings with two walks and three strikeouts. He was followed by two shaky innings by freshman Jordan Floyd, who gave up two runs in as many innings, while sophomore Jordan Witcig tossed two more scoreless innings. Senior Jared Moore allowed another run in an inning of work while notching a couple of strikeouts, while freshman Ethan Landon finished out the game with a scoreless ninth inning.

The Bat Cats play next this weekend as they return to Tointon Family Stadium in Manhattan to take on Oklahoma State, followed by the last series of the season the weekend after that at home against Texas. Currently sitting in last place in the Big 12 standings, the Wildcats will need to finish strong if they hope to earn a spot in the Big 12 tournament. They are two games behind the Oklahoma Sooners who hold the eight-seed.

Update: A previous version said Wichita State was part of the Mountain West Conference. They are part of the Missouri Valley conference. 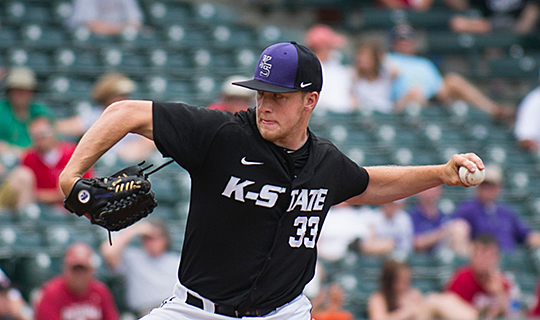