When it comes to a hectic week of cramming, exams and wrapping up another academic semester, the last thing many students want to worry about is spending precious study time making meals.

While food is obviously an important element in fueling these end-of-the-semester activities, students often sacrifice nutritional value, and even full meals, in lieu of extra minutes studying or a little extra sleep. However, there are a multitude of fast, easy and even healthy options students can utilize for a quick lunch or dinner during finals week chaos.

Kassie Curran, graduate student in agricultural economics, said one of her favorite go-to meals during a busy week is wraps.

“I like to make anything in a tortilla,” she said. “If I have eggs, I can fry them and add cheese and salsa. Or, if I’m packing lunch, I’ll put lunch meat and cheese and mustard in a tortilla. It’s fast and easy, and because you can put whatever you want in them, you can get your protein and carbs and everything for nutritional value.”

Another great use for tortillas is creating a quick pizza for dinner. Start with a tortilla of choice and top with 1/4 cup pizza sauce, 1/4 cup shredded mozzarella cheese and favorite pizza garnishes. Bake in the oven at 425 degrees for 7-10 minutes, or until the tortilla is crispy and the cheese is melted.

Occasionally, it’s easier to buy pre-made meals instead of taking the time to prepare food from scratch, but that doesn’t mean students have to sacrifice nutrition for convenience.

“I buy a lot of Amy’s (Kitchen) organic frozen burritos or canned soup, in case I’m in a hurry at lunch,” Levi Kuhn, senior in marketing, said.

Kuhn said he doesn’t usually like to eat pre-made food, but when he does, his choices tend to be on the healthier side.

However, when it comes to cooking up his own creations, Kuhn said he’s a big fan of paninis.

“I have a panini press, so I like to make them with pepper jack cheese and ham and whole-grain Dijon mustard,” Kuhn said. “It takes 15 minutes tops, and you just have to cook it until the bread is toasted and the cheese melts.”

For those who don’t have a panini press, Kuhn said it’s just as easy to cook them in a pan, similar to a grilled cheese sandwich. He said he prefers using olive oil instead of butter.

If students are really looking to invest in nutrition during finals week, Kirsten Sooter, senior in public health nutrition, said there are plenty of options.

“A peanut butter and jelly sandwich on wheat bread can go a long way,” Sooter said. “It provides essential nutrients and is a complete protein that will give you lasting energy. You can also prepare pastas, like spaghetti and meatballs, the weekend before and stash them in containers for a quick, heat-and-eat meal.”

Sooter also said she recommends filling your refrigerator with vegetables and fruits, like carrots, apples, celery and bananas, which can be taken for quick on-the-go snacks. They contain vitamins and fiber to keep your mind awake during long periods of studying.

With a little creativity and even less time, students can create a quick and healthy meal that not only help them power through the last few days of the semester, but keep their stomachs full in the process as well. 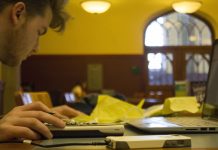 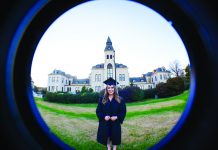