“A lot more fight today,” head coach Brad Hill said of his team’s performance. “That was no comparison to yesterday. No comparison.”

The Wildcats quieted last night’s offensive woes by striking quickly with a run in the bottom of the first inning. However, Oklahoma State came back with two runs in the second and four more in the top of the fifth to jump ahead 6-1.

The offense had a much stronger presence game two, striking for 11 hits and four walks. Junior center fielder Max Brown had three of the free passes and also showed off his speed with two bunt singles.

“Definitely fought, competed a lot better today,” Santigate said of coming up short in the middle game of the series. “Obviously the result didn’t happen, but how we approached things is the way we want to approach things and we just have to keep building from that. Hopefully if we keep doing what we did today, it will result in a win.”

Jake Matthys made his second start this season for K-State, but had his share of struggles. The sophomore allowed five runs off six hits while striking out one and walking no batters in his four inning performance.

The two teams will square off tomorrow at 1 p.m. for the series finale as K-State looks to avoid its third straight sweep in Big 12 play. 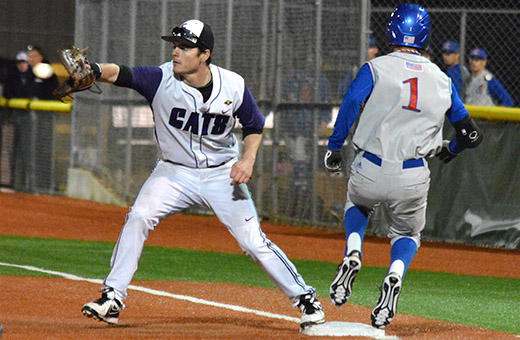