Grant Robbins, who most recently spent 11 seasons at Memphis, was named the 13th coach for K-State men’s golf. The coaching veteran replaces departing coach Tim Norris. The longtime K-State coach is finishing his 17th season at the helm of the program.

“We are excited to welcome Grant, his wife Brooke – a K-State graduate and Wichita native – and their children Bryce and Brayden to Manhattan and the K-State family,” Currie said in Sunday’s press release. “Coach Robbins is one of the top teachers and coaches in collegiate golf, and his reputation and ability to recruit and develop student-athletes set him apart throughout our national search. He has been nationally recognized as a program builder at UNC Wilmington and Memphis and guided teams to numerous NCAA Regional appearances. We look forward to him joining the Wildcat family and leading our program.”

Robbins joined his hometown university after serving as the coach at UNC-Wilmington from 1999-2003.

“I am excited and honored to have been chosen to lead the men’s golf program at Kansas State,” Robbins said. “Having coached at my alma mater for 11 years, it was going to take something very special for me to leave, and K-State is a very special place. The challenge of competing in the Big 12, the incredible facilities at Colbert Hills and the dynamic leadership of John Currie all make this such an incredible opportunity. My family and I can’t wait to get to Manhattan.”

Following his playing career at Memphis, Robbins played in three professional tours. He entered the PGA in August 2007 and is now a PGA Class A Professional. 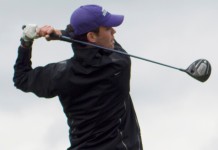 Pair of Wildcat golfers in top 10 after second round in...