A study, funded by the Department of Energy and published in the Nature Climate Change journal, shows ethanol production from corn crop residue releases more carbon dioxide into the atmosphere than gas. The authors of the study (researchers at the University of Nebraska-Lincoln) concluded that removing crop residue from the soil to make ethanol adds an additional 50-70 grams of carbon dioxide per megajoule to the lifecycle greenhouse gas (GHG) intensity, a measurement of CO2 released per unit of energy produced, to the already 30 grams released in biorefinery. Regular gas production has a GHG intensity of 94 grams of CO2/MJ, so this puts ethanol well beyond gas in terms of net CO2 production.

The general media rushed to condemn cellulosic biofuels as a result of
the study. Some newspapers indicted corn-based biofuels as “worse than
gas” and “less green than gasoline.” However, are these indictments
justified?

The extra CO2 emissions come from a trade-off between carbon that is fixed in the soil by leaving the crop residue, versus what is released into the atmosphere by making ethanol and burning it. According to the authors, “removal of corn residue for biofuels can decrease soil organic carbon and increase CO2 emissions because residue carbon in biofuels is oxidized at a faster rate than when added to the soil.”

So, the net balance between fixed and released carbon is what is important. This is not new to soil scientists and experts in the topic. Deann Presley, associate professor of agronomy, said she is not totally surprised by the findings.

“As a soil scientist, I know that (in order) to improve soils, we need to stop erosion and keep adding organic material into soils that will eventually turn into organic matter,” Presley said. “So, obviously removing crop residues is the opposite to that.”

“(The study) should be seen as reinforcing what many advocates for cellulosic biofuels have known all along: cellulosic biofuel production systems that systematically deplete soil organic carbon are unsustainable,” Jordan said.

Perhaps the authors had this message in mind all long. Humberto Blanco, UNL assistant professor of soil science and one of the authors of the study, said in an emailed response that the study can have some repercussions on the Obama administration’s renewable energy policy if crop residue is removed
at excessively high rates and no mitigation practices (i.e., cover crops
or forage crops, etc.) are used after removal.

Given that ethanol from corn crop residue is just a small piece of the portfolio of biofuels, this study may not have deep impact in the industry as a whole. However, it can bring awareness to the general public about the unintended consequences of corn crop residue biofuel production in Kansas: soil erosion and water reservoir depletion due to irrigation. Presley said in order to produce a renewable energy, it has to be renewable across the whole system, and soil and water used for irrigation of corn crops are not renewable.

In answer to the question of how the ethanol industry can move forward, Blanco pointed to perennial grasses as an alternative to the use of corn crop residue. Research from crop science shows that perennial warm season grasses can protect soil and the environment while providing material for ethanol production, and the industry should explore further in this direction. 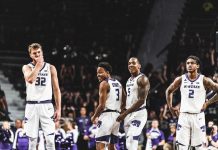 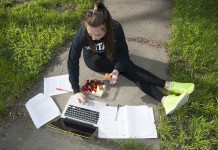