The word “desolate” may come to mind when walking down the streets of Aggieville on a summer Tuesday night. A few bar hoppers can be seen criss-crossing the normally packed sidewalks as music plays faintly in the air. Though it may not seem it, a crowd has gathered in the back of one bar at precisely 10:30 p.m. as they always do. For every Tuesday at O’Malley’s Alley, a rendition of “Low Rider” by War can be heard blasting over the speakers.

That signature song means it’s time for Tuesdays with Chappie.

From touring with Motown bands to being a Manhattan summer staple, Doug Chapman (better known as Chappie) has lived a life of music and entertainment for the better part of his 66 years.

After working a summer harvest as a high school freshman, Chapman spent his $325 earned on the guitar he would play throughout his entire career.

Chapman and his first four-piece band began playing at self-invited parties throughout high school, leading to the group’s first paid gig which brought in $4 per bandmate. After attending K-State to pursue a degree in nuclear engineering, Chapman formed the group that would later become the Devastating Dinks. At a time when the Temptations reigned supreme, the group spread the Motown sound across the Midwest as an eight-piece band.

They toured on weekends during the school year and six nights a week in the summer though Colorado, Kansas, Missouri, Nebraska and Oklahoma, making $2,000 a night. The band would later open for acts such as the Beach Boys, Herman’s Hermits and People. Their shot at a recording contract with Capital Records came contingent upon successful performance opening for Sonny and Cher. However, the deal fell through when the duo’s show was cancelled.

With no contract and no desire to pursue another deal, the group disbanded, allowing Chapman to accept an offer for a 16-state tour with the Drifters, after being noticed by their manager at a Dinks show in St. Louis.

By age 20, Chapman was touring with with the ABC television show “Hullabaloo” in small, racially segregated venues in the deep south.

“The minute the music started, the crowd all meshed together – all dancing with each other,” Chapman said. “We were helping integration through music.”

For his time with the Devastating Dinks, as well as his solo pursuits, Chapman was inducted twice into the Kansas Rock & Roll Hall of Fame in 2013. With his family and friends in attendance, the Dinks reunited for a commemorative performance at the ceremony.

“We absolutely killed it,” Chapman said. “My dad was there – he put up with me running around the country. If no one else except my family was in the audience, it would have been cool.”

Though Chapman is still in high-demand for private performances in his home of Manhattan, Kansas and around the nation, he maintains a standing gig on Tuesday nights at O’Malley’s Alley.

The Tuesday night tradition started with an O’Malley’s open mic night in 2002. After several weeks performing to crowds on Monday nights, he was offered a solo spot in the Alley where he entertains regulars and newcomers alike.

“The fact that I can still please people, put a smile on their face and have them tap their foot – you can’t put a value on that,” Chapman said.

“There was never any question of where to be on Tuesday nights,” Joe Falter, K-State alumnus said. “I’ll never forget being surrounded by good friends and good music.”

For Chapman, every week is about the support from first-time attendees and fans near and far. He sells T-shirts during his shows and receives orders from former attendees around the country.

“To see young people come and enjoy it, if I made no money at all, it’d be worth it,” he said.

With an average of 130 gigs a year, Chapman shows no signs of slowing down. He continues to learn and add new material to his already 400 song repertoire, much to the surprise of his family.

“The fact that I’m going to be 66-years-old and I’m still being accepted by an Aggieville crowd, that’s the highlight of every week,” Chapman said. 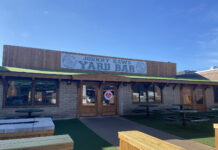 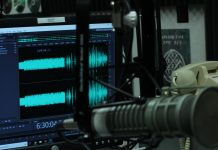