Now, sitting in Phase III of the Bill Snyder Family Stadium Master Plan, Currie is in the process of delivering results on the objectives set by Schulz and company a half-decade ago.

“When I came five years ago, obviously there had been a lot of good things done at Kansas State over the previous 25 years,” Currie said. “You get into a pattern where every 10-20 years you’ve got to take a hard look at your facilities, and it was time for K-State to do that. President Schulz had challenged me in the interview process that he felt it was going to be something very important for us as well. The first year was about trying to figure out our financial situation. When we got here, the budget projected at a $2 million deficit. We were really down on fundraising and we had to figure all that out.”

In Currie’s July 2 emailed letter to fans, the work of the last five years encompassed a 49 percent increase in the program’s overall budget of $44 million in 2010.

“Coach Snyder has those 16 goals, and two of my favorites are No. 5 Unity and No. 12 No Self-Limitations,” Currie said. “I think for a long time, K-State people tended to say that’s just the best we can do when it really wasn’t. Building facilities like the Basketball Training Facility, which was really our first big athletic project that was a part of our $125 million of projects that we’ve already completed, really opened people’s eyes that we could build a first-class and world-class facility that’s one of the best in the country.”

During the Spring Game on April 26, Currie and staff unveiled a massive transformation plan for the north end of Bill Snyder Family Stadium and the Vanier Football Complex. The $65 million project will be substantially completed in time for the 2015-16 fiscal year.

Currie said it couldn’t come a moment too soon.

“If you look at our football operation spaces right now, coaches offices, team meeting rooms, locker rooms, especially strength and conditioning, we’d easily be in the bottom two in our 10-team league,” Currie said. “That’s just not acceptable. The bottom one or two in our league probably puts you in the top 50 nationally, but that’s not where we want to be. We’re in a group of 65 highly visible schools in five conferences where the stakes are pretty high.”

As the recently released budget details, the project has been a part of a growing participation in Ahearn Fund memberships.

According to Currie, numbers of donors have nearly doubled in his five-year tenure at the university, and donations range from $50 a year to $100,000 a year. More specifically, K-State boasts season-ticket holders from 46 states and has donors in 19 states giving at least $10,000 a year.

“When we started this process, keep in mind that Nebraska was still a member of our league and Colorado, Missouri and Texas A&M were still all in our league,” Currie said of the master plan’s beginning. “It was a long time ago. Our budget was 50 percent less than it is now, because we did all that pre-planning and established our priorities. We’ve been able to keep things moving along and we stayed ahead of the curve.”

As K-State enters its next step in renovating Bill Snyder Family Stadium, Bramlage Coliseum will also get its chance to shine.

Currie said the renovations will not only improve the environment for the players, but also said he’s excited for what fans will notice from the pregame and in-game atmosphere.

“The lighting aspect of it in Bramlage is not only more environmentally friendly because it’ll use LED-type lighting that doesn’t use nearly as much energy as the traditional bulbs that we have now, but it will offer us a lot more flexibility,” Currie said. “For instance, we can turn out the lights at introductions and darken the arena and bring them back up right away.”

With four phases remaining in the master plan process, Currie said the effects of the projects have continued to stretch K-State’s nationwide reputation.

“Within two weeks of opening it [West Side Stadium Center], the folks from the University of Utah and University of Arkansas came,” Currie said. “Memphis came a few weeks ago. Nationally, there is a great deal of people noticing the transformation K-State has undergone over the last five years.” 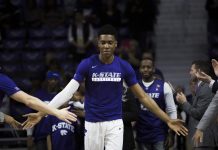