Home Community Opinion Opinion: Is the state of Kansas serving future generations, should they?

After years of short-sighted policies from our state capital, young Kansans must ask: does this state have our best interest in mind?

To answer this question, the dreadful state of education in Kansas is a logical place to start. Not only are budget fluctuations disrupting our schools and causing tuition costs to skyrocket, stagnant pay rates and less employment rights are also making the field a tough place to work. This means many of our generation’s most important public servants, our educators, are finding their dream job (making a difference in the lives of their students) harder to reach. For any state that is truly focused on investing in its future, this is simply unacceptable.

Then there’s the issue of our “experimental” economic policies. While some in our state are receiving huge tax breaks and the burden is shifting to struggling and often younger individuals, our state’s revenues have run dry. Unless we figure out a way to fill our budget deficits, we’ll be sitting in the hole with $3.7 billion less to spend on things that matter for our future (schools, roads, bridges, etc.). One thing’s for certain—a bankrupt government can’t do much investing.

But, as President John F. Kennedy would agree, it’s not all about what our state can do for us. Because unfortunately, given our extremist lawmakers and depleted treasury, it can’t do much. Now, more than ever, is the time time to ask, “What can we do for our state?” The simple answer is: “everything.”

The policies being enacted now are the ones we, as a generation, will be faced with as we continue to shape and move forward with our lives. More than any other group of voters, we will pay the price for our lawmakers’ lack of long-term vision.

It’s no secret that young voters have represented a minuscule portion of voter turnout in past elections, whether local, state, or national. When the 2010 midterm elections took place, 46.3 percent of 18-29 year old Kansans were registered to vote. However, the percentage of this age group who actually voted was an abysmal 20.5 percent, which ranked Kansas youth 42nd out of the 50 states in terms of voter participation.

Given these numbers, should we really be surprised that the 2010 election cycle marked a sharp change in the political climate in Kansas which has severely damaged the outlook for our generation?

Our state’s history is one of prosperity and common-sense governing. A moderate coalition of members from both parties used to decide the law of the land. Today, that coalition has deteriorated in the halls of our state capital.

Since 2010, monied interests have brought us a new type of government and delivered Gov. Sam Brownback as their executive. By 2012, rather than working with the moderate members from his own party, Gov. Brownback campaigned for primary challengers that more closely matched his brand of politics. After replacing several seats in the legislature, this radical new government got to work on the agenda that has brought us to this deplorable juncture in our history.

Elections have consequences. And now, four years later, we have the opportunity to change the direction of our state.

Are you voting this year? Are you registered? Who are you voting for? Why? As a citizen, you have a civic duty to pursue answers to these questions.

In this digital age, it has never been easier to be an informed voter. In addition to our ordinary online consumption, let’s not forget to set aside a little bit of time each week to educate ourselves and remain aware of the challenges and issues facing our communities. It won’t take much time, but it may make a lifetime of difference. 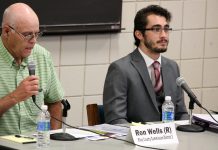 Students share opinions on why voting matters, who to vote for